The Bold And The Beautiful Spoilers: Sheila And Steffy War Erupts 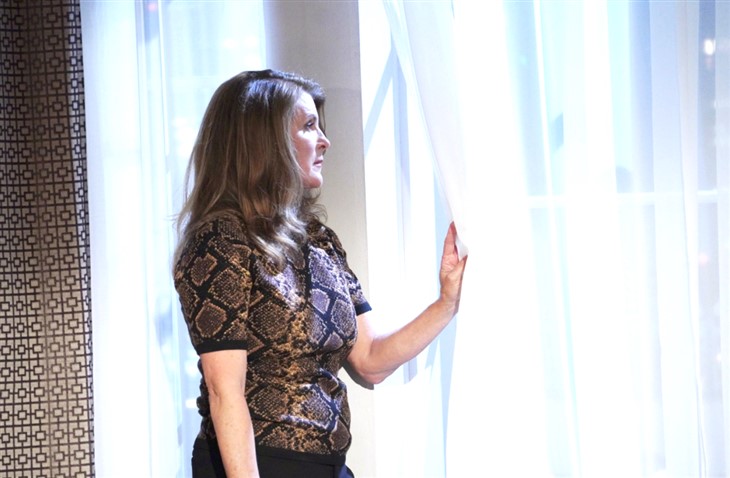 The Bold and the Beautiful spoilers document that Sheila Carter (Kimberlin Brown) will stomp through the door she forced open. Teasers indicate that John Finn Finnegan (Tanner Novlan) will be drawn into Sheila’s latest game.

Devoted B&B fans that Eric Forrester (John McCook) allowed Sheila to recuperate from a mild injury she suffered during her last return, that began in 2017 and stretched until 2018. Sheila attempted to extend her recovery period, but Quinn Fuller Forrester (Rena Sofer) was wise to her.

Now, three years after Sheila sheepishly left Los Angeles, California, she’s back and is wreaking a far more intense level of havoc than she did with Queric. Sinn is the pairing Sheila needs to split to conquer Finn and therefore gain access to her grandson.

Sheila caused more mayhem than seemed humanly possible during her various past connections to the Forrester’s. More recently Eric’s awareness of Sheila’s intent to use her injury to cause a rift with Quinn led to Brown’s legendary character exiting town.

The audience was surprised that Sheila’s last visit didn’t result in an epic storyline. To be honest, Sheila’s storyline was a bit flat. While it is always great to see this specific character return, TPTB didn’t create much space for her to play at that time.

However, as fans have witnessed, the current storyline is already epic and is only in its early stages.

Wood is a terrific actor, who recently earned her second Daytime Emmy award, in the Outstanding Performance by a Lead Actress in a Drama Series category. She won her first Emmy in 2019 and was also nominated in three other years (2012, 2013, and 2018).

Steffy is the lead actress on B&B. So, casting Novlan was a critical hire. His character supplanted Liam Spencer (Scott Clifton) as Steffy’s longtime love interest who had become an emotional albatross.

Finn was key to helping Steffy overcome her pain-killer addiction. Their bond was strong. So, Sheila’s success in splitting them immediately after the Sinn wedding is an enormous first battle victory.

The Bold And The Beautiful Spoilers – But The Fight Rages On

Steffy is not about to let Sheila threaten Sinn’s newborn son. After having some time to clear her head, Steffy also can’t allow Sheila to poison her mind against Finn.

While Steffy sees Sheila when she looks at Finn now, that mentality can and should change. Finn must also come to realize his birth mother’s ability to destabilize whatever environment she’s in.

Wood’s alter ego is right to be reeling after all that’s happened. But she is a Forrester and a Finnegan. Those families must unite and fight against Sheila to defeat her. Disunity will likely result in no one winning, including Sheila.