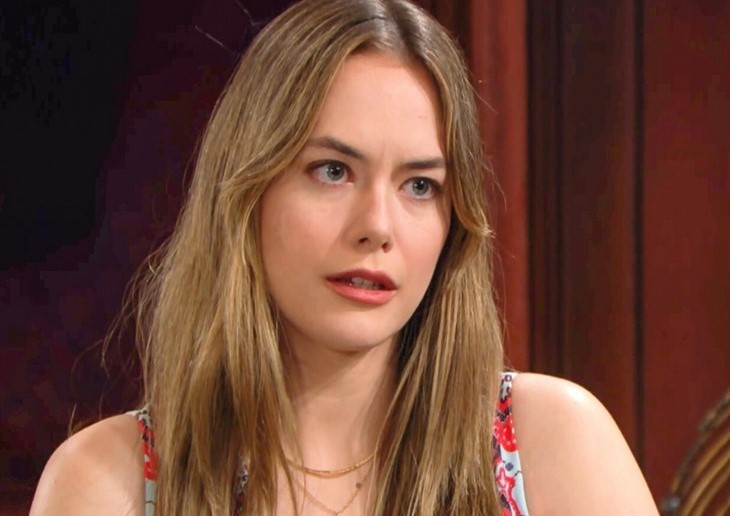 The Bold and the Beautiful spoilers reveal that Hope Logan Spencer (Annika Noelle) secretly stalks Justin Barber (Aaron D. Spears). Unaware that he’s being followed, Justin heads to Spencer Publications to check on his hostage. As Hope trails him, she is horrified to discover Justin has Thomas Forrester (Matthew Atkinson) locked in a cage.

The Bold And The Beautiful Spoilers – Hope Logan Spencer’s Concern

B&B spoilers reveal that Hope will become concerned about Thomas vanishing without a trace. Ridge Forrester (Thorsten Kaye) has already begun asking questions. He might ask Hope if she’s seen or heard from Thomas as he missed an important meeting at Forrester Creations.

When Hope realizes that she hasn’t seen Thomas in a few days, she will try to figure out where he is. Hope is already having to deal with telling the kids about Liam Spencer (Scott Clifton) possibly going to prison. She doesn’t want to have to tell Douglas Forrester (Henry Joseph Samiri) that his father is now missing.

As Hope starts her search, something directs her attention to Justin. She will either observe something strange or hear a conversation that doesn’t make sense. Possibly, Hope might question Justin regarding if he’s seen or heard from Thomas. His answer might alert Hope to the fact that things aren’t adding up. Somehow, she will get the idea that Justin is up to no good and secretly follows him.

The Bold And The Beautiful Spoilers – Thomas Forrester Rescued

The Bold and the Beautiful spoilers reveal that during the week of July 5, Hope follows Justin. He has no idea that he is being trailed and goes about his business, which includes checking on his hostage. Justin will lead Hope straight to the underground dungeon where Thomas is being held hostage. Hope will hide until Justin leaves the room. When the coast is clear, she goes to try and free Thomas. She will have trouble getting the lock open, though.

While she’s struggling to save Thomas before Justin comes back, she learns the truth about Vincent “Vinny” Walker’s (Joe LoCicero) death.

Around the same time that Hope secretly follows Justin, Ridge also gets the idea that he’s up to something. Ridge might see what happened by looking at the video footage at the office. However, if that were the case then the police should be called. It would be far too dangerous for Hope to follow Justin, especially by herself.

So, we are thinking that when Hope can’t get the lock open, she worries that Justin could kill Thomas. She might send an SOS text message to Ridge. He ends up confronting Justin and angrily demands to know what happened to his son. As the walls close in on Justin, just how desperate will he get to remain in control? Could he try to silence Ridge, too?