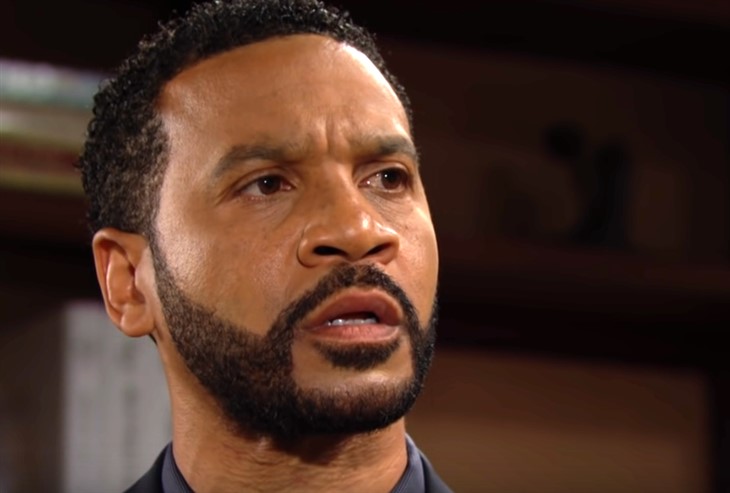 The Bold and the Beautiful (B&B) spoilers reveal that in Los Angeles Justin Barber (Aaron D. Spears) is beginning to regret his decisions. He can’t keep Thomas Forrester (Matthew Atkinson) locked in a cage forever. He could give up and accept that he could go to prison. In Justin’s eyes, his life is over. So, imagine his confusion if Thomas covers for him and keeps the cage incident a secret.

The Bold And The Beautiful Spoilers – Justin Barber Regrets Decisions

B&B spoilers reveal that in last week’s issue of Soap Opera Digest, Spears talked about the murder mystery twist. During that interview, the actor admitted that Justin knows his plan has spiraled out of control. He made split-second decisions that he now realizes will only make the situation worse.

Spears mentioned that Justin is regretting certain choices he has made and knows he can’t keep Thomas locked in a cage forever. So, that indicates Justin knows he has to let Thomas go at some point.

It is clear that Justin has a lot of rage over how things have panned out with Bill Spencer (Don Diamont). Justin bent over backward and put his own career and freedom on the line to get Bill out of all of his messes. Justin did this over and over because he’s loyal, and he assumed that he would be rewarded in the end.

Justin didn’t go from being Bill’s right-hand man to crossing him overnight. There were small things that kept happening. Over time, they kept piling up until one day, Justin snapped. That is what landed Thomas in the cage. Now he is looking at the reality of the situation. He is thinking about the long-term consequences.

The Bold And The Beautiful Spoilers – Releases Hostage And Accepts Fate

The Bold and the Beautiful spoilers reveal that Thomas has already gotten to Justin. It was clear that Justin felt a sting when Thomas said he was just like Bill. Even though Justin has spent years protecting Bill, he does have some decency. That is what Thomas was aiming for when trying to convince him to open the cage.

Justin will think about the long-term consequences of his actions. He will also discover that his plan has other complications. Justin will probably get to the point where he has to accept that this was a bad idea. As a lawyer, he knows that it would be better for him to release Thomas than for the police to have to go on a rescue mission. He could accept that prison might be in his future.

The only thing Justin can control is how long he is sentenced to prison. Knowing remorse can help with a lighter sentence, Justin might release Thomas before police figure out he’s missing.

There might be a surprising twist in this storyline, though. Justin releases Thomas, who he expects will tell the police everything. Once police learn about the cage, they will come to arrest Justin. At least, that is what Justin thinks is going to happen.

So, wouldn’t it be an interesting curveball if Thomas didn’t mention the cage? In fact, he could protect Justin by covering for him. It’s true that Justin deleted the video from Thomas’ phone, but we live in the Cloud Era. Most electronics, including phones, are automatically synced to a cloud account. Justin will be baffled as to why Thomas covers for him. This could be simply a “you owe me” kind of thing that will bite Justin later on.

Or, Thomas might decide that Bill needs to be punished and Justin would be the perfect partner to make that happen. Of course, they need to get Bill and Liam Spencer (Scott Clifton) out of jail first. Once that happens, then they can lay the foundation for Bill’s real nightmare.