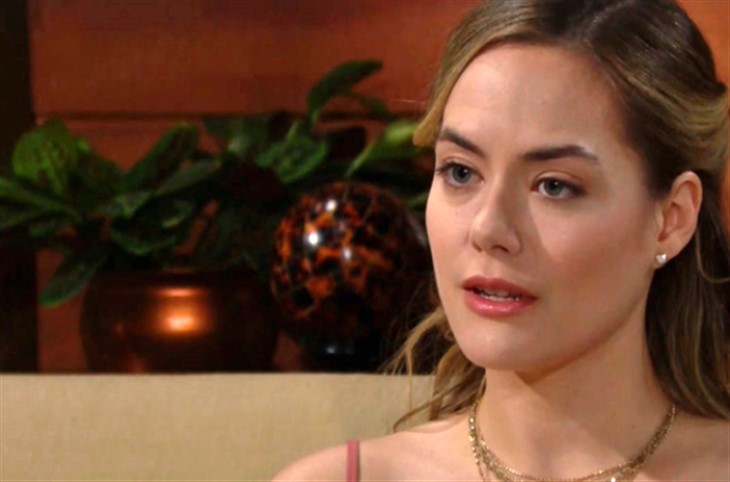 The Bold and the Beautiful (B&B) spoilers document that Hope Spencer (Annika Noelle) just received her first glimpse at an admission. But Liam Spencer (Scott Clifton) will realize that his fate was sealed long ago when the full reveal happens in the nearing future on B&B.

A thoughtfully planned date-in night at the cabin is followed by a conversation veering into an area Liam didn’t want to hit. Yes, that is a hard wink at Vincent Walker (Joe LoCicero) being struck by the car Bill Spencer (Don Diamont) owns and was a passenger in while Liam was driving.

The Bold And The Beautiful Spoilers – Assuming The Worst Lope Outcome

It is optimistic to believe that Hope will tap more inner reserves and forgive Liam. That seems like an extra stretch when considering Thomas Forrester’s (Matthew Atkinson) persisting lurch into stability and his romantic availability.

Along with the above, Hope will realize that Liam is caught in a no-win situation. Should he have immediately told her what happened? Yes.  But does not doing so represent some mortal breaking of their remarriage vows? No.

It could be that Hope’s belief in Liam remains deeply fragile. If that proves out, then she will see his choice to follow Bill’s advice, by keeping her in the dark, as enough to end Lope.

Since a separation period already happened in the recent past, Hope would likely break from Liam because she wouldn’t be able to trust his word.

It’s important to reference Thomas again because B&B appears to be positioning Atkinson’s character as Vinny’s avenger. If Thomas breaks the case, then he’ll have an extra heavy emotional influence on Hope’s perception of the fallout. That wouldn’t be good for Liam.

The Bold And The Beautiful Spoilers And Recap Tuesday, May 18: Liam And Hope Make Love, Wyatt Grows Suspicioushttps://t.co/UjtkJCPNQg

Liam would like to believe that he’s living in a nightmare. He hasn’t awakened to learn that Bill put him in the sports car, didn’t report Vinny’s death, and then covered up what happened.

But Liam did wake up at his dad’s house and has followed Bill’s well-intentioned, but still bad advice ever since. That makes Liam responsible for his own decisions, which includes not telling his wife that he accidentally killed Vinny.

No do-overs are possible in this storyline. So, Liam believes that he’s fated to realize justice through the legal system and more importantly, explain himself to Hope.