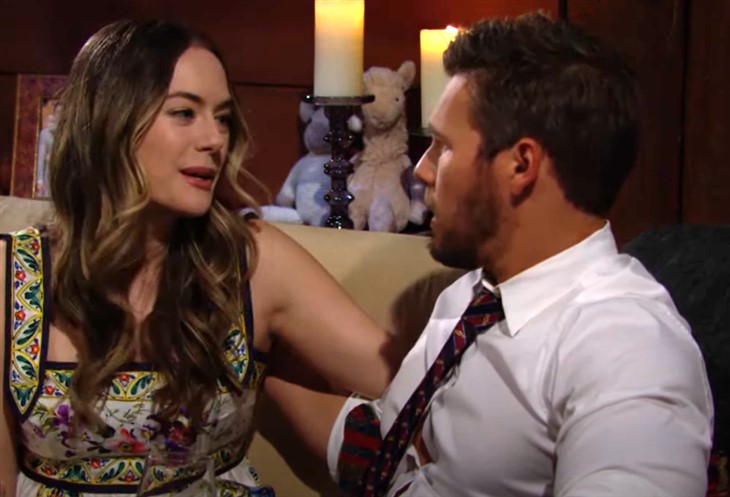 The Bold and the Beautiful (B&B) spoilers for Tuesday, May 18, 2021, reveal Liam trying to forget everything and move on with his future with Hope.

The Bold And The Beautiful Spoilers – Romance Time

Liam (Scott Clifton) is thrilled to be back living with Hope (Annika Noelle) and the kids in that tiny little cabin but of course, he is still harboring a huge secret because Liam is always harboring a secret. Hope still hasn’t learned this fact for some reason.

This time, the secret is not about an affair but instead, it’s about a hit and runs in which Vinny (Joe LoCicero) ended up dead. But Liam needs to put that out of his mind because it’s time for his romantic side to come out.

He and Hope still have not slept together since she learned he might have impregnated Steffy (Jacqueline MacInnes Wood) again, but that’s about to change when he prepares a special evening for Hope. He lays it on thick with romance and flowers and Hope is swept away by all of it. While it looks like the pair may be able to start over, even sleeping with Hope gives Liam the guilts and his week is about to go downhill from here.

Hope is blissfully happy that her life is exactly the way she wants it again but little does she know that bliss is fleeting and she may have to care for Liam in ways she never imagined before.

The Bold And The Beautiful (B&B) Spoilers: Here’s Why Bill Is Right To Protect Liam https://t.co/0yL4jXqmef pic.twitter.com/fewBGWT0Wh

B&B Spoilers – Liam Spencer Tries To Forget Who He Is

As Liam romances Hope and then nearly has another nervous breakdown, Bill (Don Diamont) still has to calm down Wyatt (Darrin Brooks). He is relentless in his pursuit to know what secret his father and brother are harboring but Bill still won’t budge. After all, he can’t let Wyatt become an accomplice. But how much more can he keep this secret to himself before he flips out too?

Things are even more suspicious for Wyatt now that he has seen Bill and Thomas (Matthew Atkinson) having an argument. That’s not a normal state of affairs so it looks like Wyatt may do some digging on his own. Stay tuned to The Bold and the Beautiful weekdays to see how this story plays out.