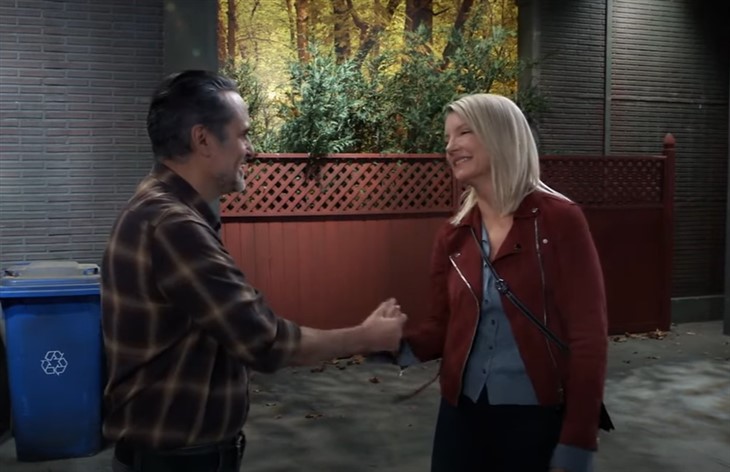 General Hospital (GH) spoilers tease that Nina Reeves (Cynthia Watros) has been able to keep her relationship with Sonny Corinthos (Maurice Bernard) platonic even though in his amnesiac state he calls himself “Mike” and is very attracted to Nina. But as much as she dislikes Carly Corinthos (Laura Wright) it doesn’t seem as if Nina has any intentions of bedding Mike.

Nina likely knows that at some point on General Hospital, Mike will remember his life and it will be better for Nina if she doesn’t complicate things. But as they work together to take down Elijah Crowe (Dan White), Nina may not be able to resist.

General Hospital Spoilers – Elijah Crowe Is On To Nina Reeves!

General Hospital spoilers reveal Nina thought she was being clever when she broke into Elijah’s office by leaving an earring and then claiming to have come back to look for it. But Elijah saw right through Nina’s act and will likely want to know exactly how much she knows.

Nina is a fighter but Elijah will likely get the upper hand and will likely be about to kill her when Mike will most likely swoop in to save the day. Even though he doesn’t remember his life in the mob, he still knows how to fight and how to win. Once Mike and Nina convince the authorities of Elijah’s guilt, Nina will be quite thankful to Mike for saving her. She may forget that he is really mob boss Sonny Corinthos in those moments and may just give in to Mike’s advances!

GH Spoilers – Nina Reeves Will Feel Guilty If She Sleeps With Mike!

Even though Mike has assured Nina that he isn’t in a hurry to find out his past or get his memories back, Nina still won’t feel comfortable with any type of physical relationship between them. She may be so freaked out that she returns to Port Charles, leaving Mike to wonder why she ran away.

It won’t be too much longer before Sonny regains his memories but what about his feelings for Nina? Will they remain or will Sonny return to the loving arms of his wife? Will he tell Carly that he slept with Nina?  GH spoilers and rumors hint Carly’s new role as head of the Corinthos Organization will turn Sonny off. If so, it’s entirely possible he will seek Nina out, this time knowing exactly who he is.

General Hospital Spoilers: Why Roger Howarth Can Return As Francohttps://t.co/AoOb03HHW8

Will Sonny and Nina make love on General Hospital while he is still without his memories? Will Nina feel so guilty that she leaves Nixon Falls immediately afterward? And how will Sonny feel about Carly or Nina once his memories returns and he sees the role Carly has taken on? Will they just go right back to their happy marriage or will Sonny still be attracted to Nina?

Amnesia can make for strange bedfellows in Port Charles so stay tuned to General Hospital airing weekdays on ABC. And don’t forget to check back right here on Soap Opera Spy regularly for all your General Hospital news, rumors, and GH spoilers!

Days Of Our Lives Spoilers: Claire’s Led Into Jan’s Lair