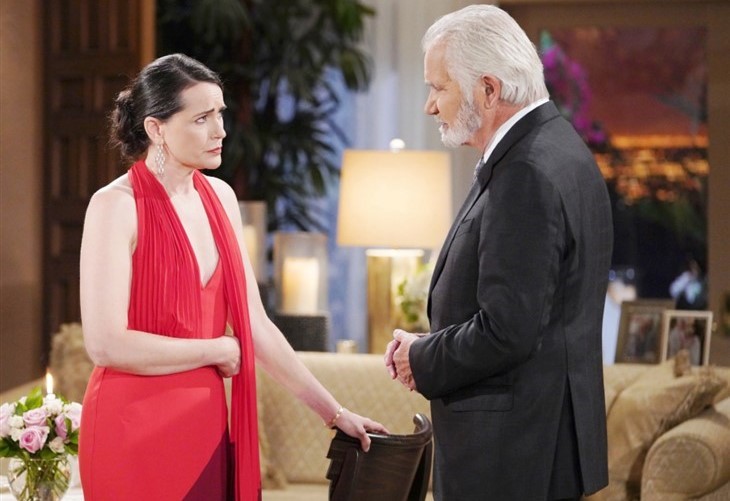 The Bold and the Beautiful spoilers document that Eric Forrester’s (John McCook) decision to endorse the connection that Quinn Fuller (Rena Sofer) and Carter Walton (Lawrence Saint-Victor) created is a distraction. Eric’s choice naturally confused Quinn and Carter. But it also blinded them to a deeper issue.

Ridge Forrester (Thorsten Kaye) has already caught onto his father’s change in demeanor. Rather than being the confidant, world-renown fashion icon, he is full of self-doubt.

Brooke Logan Forrester (Katherine Kelly Lang) blames Quinn for Eric’s state of mind. To a degree she is right. But the person who is responsible for developing and then wallowing in self-pity is McCook’s character. Eric made himself the victim. That is his fault.

The Bold And The Beautiful Spoilers – Quinn Fuller Causes Damage

Quinn felt that Eric pushed her away after the breaking Bridge scheme flopped. He was fully within his rights to be outraged with his wife. Over time, disappointment and a feeling of malaise set in.

Eric is not believed to have been experiencing physical problems during the period in the plot when Quinn was encouraging Shauna Fulton (Denise Richards) to supplant Brooke in Ridge’s life. But it is fair to wonder if the cumulative effect of that event and all past ones did more than break Eric’s trust?

Is it right to suggest that Eric may have developed a mental block? He does not trust Quinn on the deepest level and is arguably preventing himself from being close to her again.

Carter was devastated when learning that Eric knew about Quarter. Saint-Victor’s character respects his boss, mentor, and friend, even though he has become involved with Quinn.

But Eric’s direct statement to Quinn and Carter at the mansion was life-altering. Carter, like Quinn, heard Eric say that he was okay with Quarter’s revival. Of course, McCook’s alter ego did not know that it was never fully shut down.

So, because he has fallen for Quinn, Carter is not over-thinking Eric’s shocking approval.

The Bold And The Beautiful Spoilers – Eric Forrester Romanticizes Future

Eric is thinking theoretically. By being noble he has forgotten someone important, himself.

What purpose will Eric have in his life as the weeks and possibly months unfold? What justification will he create for remaining married to Quinn, if she has moved on in other ways per his encouragement?

Those questions and others will be addressed on B&B this Fall.