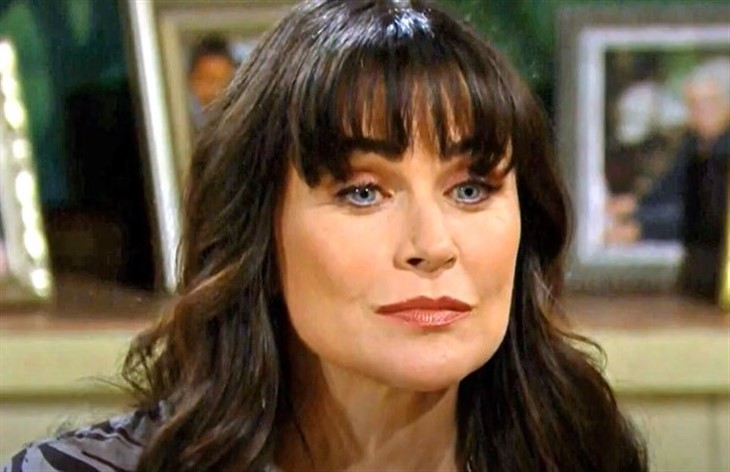 Viewers will recall that Shauna has been living in the guest house on Eric Forrester’s (John McCook) property at Eric’s invitation since she confessed the truth about their Vegas wedding to Ridge Forrester (Thorsten Kaye). She then had canceled the wedding ceremony that was to be held in the Forrester mansion, and Eric heard Quinn lambasting Shauna for her honesty.

That’s why he kicked Quinn out. Wyatt Spencer (Darin Brooks) interceded for his mother in a recent episode of The Bold and The Beautiful, asking Eric to give Quinn another chance, but Eric couldn’t oblige. Quinn had simply hurt him too much this time. Shauna, even though she was complicit, was honest about the situation. Eric admired her honesty and bravery in her admissions and that is why he invited her to stay.

The question came up during Wyatt’s visit to Eric as to where Shauna was now; her daughter Flo Fulton, (Katrina Bowden) who of course is Wyatt’s significant other, wanted to know where her mom was and how she was. Shauna hadn’t been communicating with her daughter. Wyatt figured it out that she is still there, even though Eric hadn’t told him either way. When Quinn initially found out, she was furious at Shauna – she had even accused her of trying to steal Eric from her!

Wyatt will actually make some accusations against Shauna himself, and Flo will try to referee between them, putting her in an awkward position between her boyfriend and her mother! As for Quinn, she will go ballistic again when she realizes that Shauna is still at Eric’s. Even though Shauna is in the guest house and not in the mansion, Quinn’s insecurities will continue to drive her to the worst-case scenarios and she will again lash out at Shauna! She finds out that Shauna has lied about something and kept it a secret from Quinn – maybe she’s not in the guest house, maybe she’s living in the mansion and maybe even sharing Eric’s room or his bed!

Wyatt and Flo and Shauna and Quinn may all be in a verbal free-for-all, as Wyatt and Flo lay down the law to Shauna about Eric and Quinn! If this happens at the Forrester Mansion, poor Eric might even be in the middle of the fray! It may almost enough to tempt a grown man to run away from home!

Quinn is not one to shy away from a catfight, and she has been in some doozies! Who can forget the one where she, Shauna, and Brooke Forrester (Katherine Kelly Lang) had it out in the living room and Brooke took a slug at Shauna and knocked her to the floor?! If Quinn gets more jealous and angry at her bestie Shauna, it may be her former bestie Shauna and she might repeat history and take a swipe at her herself!

Days Of Our Lives Spoilers: Ava Threatens Allie, Who Unleashes Her ‘Inner Sami’?