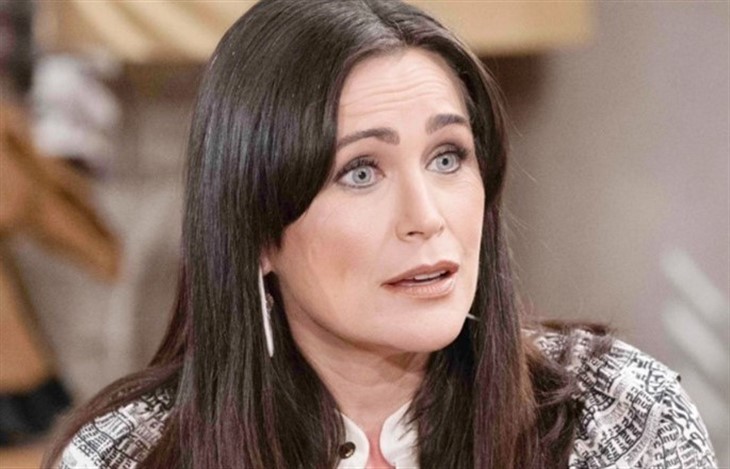 Viewers of The Bold and The Beautiful will remember that Quinn and Eric were separated for several months. It had been the last straw for Eric after he found out that Quinn had been behind the breakup of Ridge Forrester (Thorsten Kaye) and Brooke Logan Forrester (Katherine Kelly Lang) and Ridge’s sudden elopement with Shauna Fulton (Denise Richards) to Las Vegas!

B&B recaps reveal Shauna couldn’t go through with a renewal of vows with Ridge and they had never consummated their marriage, much to the frustration of Quinn. Quinn hates Brooke and wanted to make her pay and at the same time wanted her bestie to be married to a filthy rich Forrester like she was! Viewers of The Bold and The Beautiful will recall that Shauna confessed to Eric and Ridge and exposed what she and Quinn had done, and she was forgiven because of her honesty.

With Quinn, it was another matter entirely and she has had years of manipulations and lies that Eric had against her, and although he did give her one more chance, and let her move back in after nearly a year, Eric recently confided to Ridge that he still is unable to trust her. Moreover, he cannot bring himself to be intimate with her, and the connection between them is gone.

The Bold and the Beautiful spoilers show Quinn is many years younger than Eric, and she apparently cannot control her passions because even in the midst of her reconciliation with Eric, she had a one night stand with Carter Walton (Lawrence Saint-Victor)! Since it had been so long since Eric had booted her from the Forrester mansion, she may not be on birth control!

Daytime drama watchers know that in soapland, nearly every one night stand results in a pregnancy, and The Bold and The Beautiful is no different! Only a few months ago, until it was proven otherwise, it only took one mistake by Liam Spencer (Scott Clifton) to create a second child with Steffy Forrester (Jacqueline Macinnes Wood).

Viewers of The Bold and The Beautiful will recall from more recent episodes that the paternity test had been rigged and Liam isn’t the father of Steffy’s baby after all. No one will be surprised if Quinn turns up pregnant from her one night stand with Carter!

The Bold And The Beautiful (B https://t.co/Vi5UNeIvx6 #BB #Bold #BoldandtheBeautiful

For obvious reasons, even if she does manage to maneuver Eric back into marital relations with her very quickly, nine months later the truth might come out! After all, the baby may look a lot more like Carter than like Quinn and Eric, and Quinn’s cheating would become very obvious!

If Eric came to trust her again, The Bold and the Beautiful rumors tease baby would blow them all to smithereens all over again! Quinn can’t say that she had artificial insemination because she has expressed no desire for a child! Neither is there anyone in their current circle of friends that has wanted to have a baby and needed a surrogate, so that story won’t work for her either! A Carter-Quinn baby could blow up many lives!