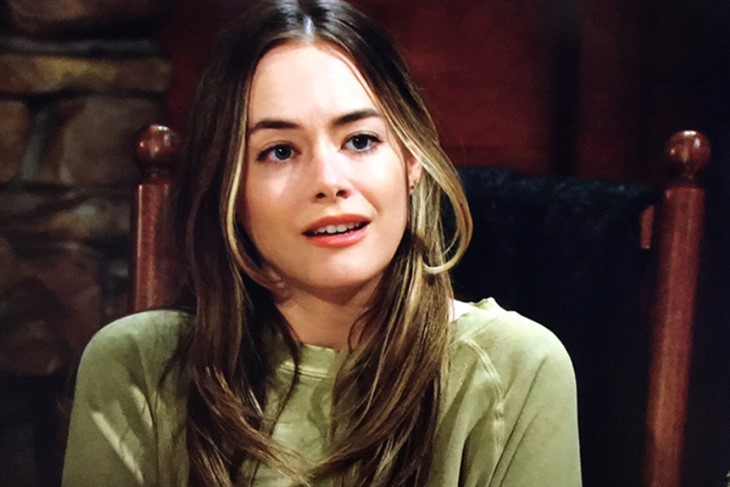 The Bold and the Beautiful (B&B) spoilers for Monday, May 3, 2021, reveal Hope thinking everything is perfect with her life, and Thomas vowing to get to the bottom of Vinny’s death.

The Bold And The Beautiful Spoilers – Liam Spencer Moves Back Home

Hope (Annika Noelle) is so naively happy to have her family back together again in her little log cabin, wearing her 21st-century version of a prairie dress. Liam (Scott Clifton) is home and their lives will be wonderful again. He will never cheat on her again with Steffy (Jacqueline MacInnes Wood) or anyone. And he certainly wouldn’t run anyone over and then hide the crime.

Oh Hope, don’t you know anything? This is Liam and when has he not caused you heartache? Hope can’t even imagine what’s wrong with Liam as he seems more on edge than ever before. Will he collapse in a puddle of guilt before the night is even out. This may not be the homecoming Hope had wanted, but it’s good enough for her cause Liam is back and Liam is all she’s ever wanted. Except when she was married to Wyatt (Darrin Books), and even then, she still wanted Liam.

Maybe Liam doesn’t like Hope spending all that time with Thomas (Matthew Atkinson). Not because he is jealous or anything. It’s not like Hope is a mannequin or anything. He just knows Thomas really wants to find Vinny’s (Joe LoCicero) killer and if he finds any evidence, it will lead straight to him and Liam can’t have that.

The Bold And The Beautiful Spoilers And Recap Friday, April 30: Liam And Hope Celebrate, Carter And Quinn Hook Uphttps://t.co/x84xfkaYON

Thomas is determined, however, as he knows there has to be more to Vinny’s death than meets the eye. He knows his friend was involved in some shady stuff. After all, he was a drug dealer and even managed to switch those DNA tests. He just never thought all those shady things would get Vinny killed in a hit and run.

Who does Thomas enlist to help him solve this crime? It wouldn’t be Hope, would it? If so, Liam may lose his mind. It’s essentially a battle between two sides of Liam — the guilty side or the side determined to stay out of jail. Which side will win? Stay tuned to The Bold and the Beautiful weekdays to see how this story plays out.