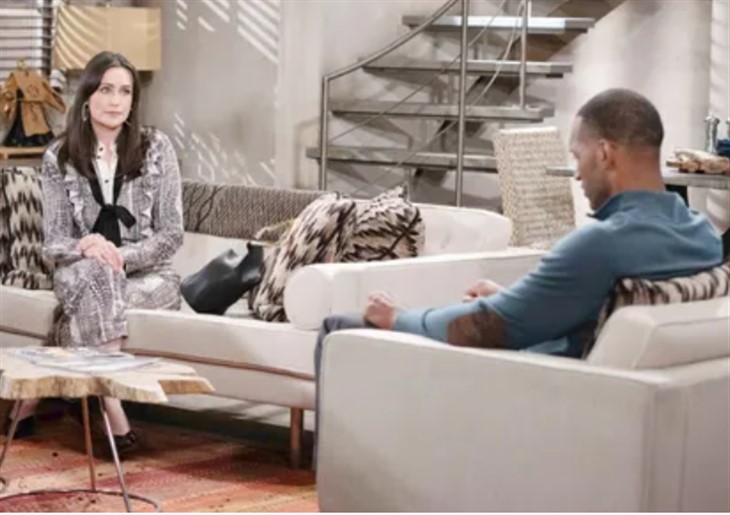 The Bold and the Beautiful (B&B) spoilers document that Quinn Fuller Forrester (Rena Sofer) was sincerely sorry for her latest mistake, error in judgment, personality quirk, or whatever she terms her willful betrayal of trust. Eric Forrester (John McCook) listened to his wife’s explanations, which could be termed excuses, and eventually asked her to return home.

Now, months after the above, Quinn finds herself toward the edge of the marriage line. Just one push from Eric and Queric will be over. But just one step too many toward Carter Walton (Lawrence Saint-Victor) and personal destruction will be ignited.

The Bold And The Beautiful Spoilers – Incapable Of Change Or Unreasonable Expectations?

One could argue that Quinn is not capable of changing who she has become. For a variety of reasons that are tied to her backstory, Quinn is mischievous.

Eric knows his wife. He’s also seen the changes in her since they’ve been married. Quinn is his staunch defender, which is just one way that he knows she loves him.

So, does Eric have unreasonable expectations right now? That’s a fair question to ask if Quinn’s conversations with Carter go no further than they have.

Kissing Ridge Forrester (Thorsten Kaye), as part of Quinn’s emotional connection to him in the recent past, was and remains key. That type of trust violation, with a man who is Eric’s adopted son, can’t be forgotten.

Forgiveness is subjective and specific to each person’s abilities. Eric’s heart has a reserved spot for Quinn. His mind has generally rationalized her flaws until now.

Quinn’s attempt to split Ridge and Brooke Logan Forrester (Katherine Kelly Lang) and set him up with Shauna Fulton (Denise Richards) naturally revived Eric’s questions about his wife’s character. That made the Bridge break a terrible idea in more than one way.

The Bold And The Beautiful Spoilers: Don Diamont Scared That Liam Spencer Will Crack Like An Egg #bb #BoldandBeautifulhttps://t.co/upwh6YnGuj

Eric recently had a warm moment with one of his ex-wives, Donna Logan (Jennifer Gareis), in Forrester Creations’ executive office. His tie adjustment reaffirmed something important. Eric can have fond feelings for others but doesn’t use those emotions to damage other’s lives.

Shauna is set up as an option for Eric if he decides to leave Quinn or he learns that she has betrayed his trust again. However, it also remains possible that Shauna could help to heal Queric, as she kindly did before.