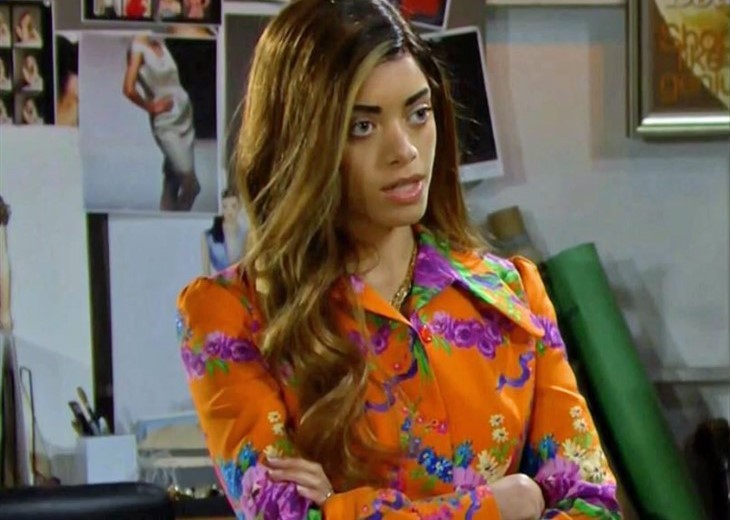 The Bold and the Beautiful (B&B) comings and goings reveal the Kiara Barnes run as Zoe Buckingham coming to a close this week.

The Bold And The Beautiful – Has Zoe Reached The End Of Her Rope?

In the spring, Barnes’ exit from B&B was confirmed due to the actress landing a role in a primetime series and fans wondered how she’d be written out. Would Zoe be killed? Will she go insane? Would she do something illegal that would land her behind bars? It looks like none of those things are going to happen and instead, Zoe will leave Los Angeles heartbroken.

The writing is on the wall as Quinn (Rena Sofer) and Carter’s (Lawrence Saint-Victor) affair comes to light this week after Brooke (Katherine Kelly Lang) decides to reveal all in the middle of Quinn and Eric’s (John McCook) vow renewal ceremony that Carter is officiating. And Brooke wouldn’t even know what happened if Paris (Diamond White) — Zoe’s own sister — hadn’t confirmed for Brooke that Quinn did indeed cheat on Eric with Carter.

There’s no doubt Zoe will be absolutely devastated that Quinn and Carter could have betrayed her like this. Quinn was her friend and promised her she would help her win Carter back. And Carter outright lied to her about who he had slept with when she knew there was another woman in his bed.

When Zoe Buckingham first arrived on the LA fashion soap scene, she had followed her former boyfriend, Xander Avant (Rome Flynn), to town. She was jealous of his relationship with Emma Barber (Nia Sioux) and it looked like she was really just a crazy cat lady who would become a stalker. But Zoe was not that at all and was heartbroken when her cat died.

That did not mean Zoe was innocent. When she learned her father told Hope (Annika Noelle) that her baby died and then sold the baby to Taylor (Hunter Tylo) so Steffy (Jacqueline MacInnes Wood) could adopt her, she almost told the truth but then kept that secret to herself for months. She was then duped by Thomas into thinking he was in love with her just to make Hope jealous but Hope woke her out of that delusion before she actually married Thomas.

Then, Carter fell for her and she seemed to be falling for Carter but there was a slight hiccup when Zende (Delon De Metz) returned to town and Zoe enjoyed flirting with him. When Carter found out, he broke things off and Zoe realized the error of her ways. She will soon learn just how wrong she was and that will surely send her out of town to re-evaluate her life. Stay tuned to The Bold and the Beautiful weekdays to bid farewell to Zoe and Kiara Barnes. Check back here for more The Bold and the Beautiful spoilers, news, and updates.