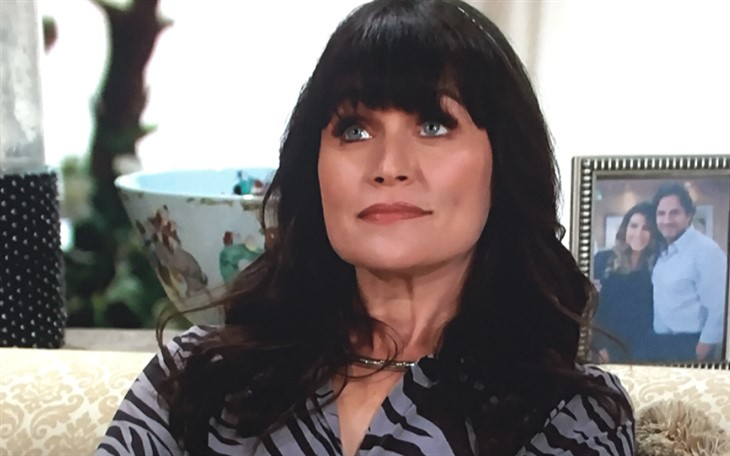 Viewers of The Bold and The Beautiful will recall that Paris knows about Quinn and Carter’s affair, and Quinn has been going crazy trying to do damage control. Carter suggested coming clean to both Zoe Buckingham (Kiara Barnes) and Eric, because it would sound better if they confessed first rather than hearing it from Paris. Viewers of The Bold and The Beautiful know that Paris has practically been chomping at the bit to warn Zoe and Eric that she was about to marry a cheater and he was already married to one.

Paris is coming from a good place, but Quinn worries that it will do more harm than good, because she had already concocted lies, and that is what Eric cannot stand, is lies! Her best friend Shauna Fulton (Denise Richards) had stepped up and lied that it was her that Zoe had walked in on hiding under Carter’s bed, but then Shauna wound up telling the truth to Paris out of her own guilt – and questions from her daughter Flo Logan (Katrina Bowden).

Shauna and Flo had maintained a relationship of openness and no secrets from one another, and that was something she could not abide – ruining their mutual trust over this lie. Quinn once again tries to manipulate the situation and decides to ask Eric to rush a vow renewal ceremony – which will not stop Eric from dumping her again even if they go through it once he potentially hears about the affair from Paris!

Quinn knows if the truth were to come out, that both Eric and Ridge Forrester (Thorsten Kaye) would feel betrayal. Eric, doubly betrayed by Quinn and Carter, and Ridge also by Carter. Viewers of The Bold and The Beautiful know that Ridge and Carter are practically best friends. Yet, Carter had gone along with the lie that it was Shauna in his bed even to Ridge.

Viewers of The Bold and The Beautiful will recall that Eric has forgiven Quinn for schemes and lies over and over again, and this last time was nearly the straw that broke the camel’s back. They were separated over a year because of her manipulations to get Ridge and Shauna married and Ridge and Brooke Logan Forrester (Katherine Kelly Lang) divorced.

That is why Quinn is rushing to get Eric to renew his marriage vows with her – vows are a promise, and she knows even though she has broken many promises to him in the past, he would never break a promise to her! However, Quinn is trying to walk on a very precarious path as well as a slippery slope trying to get one step ahead of Paris’ mouth – Paris could go to Zoe to warn her about Carter, and they all work together in a relatively small office. Eric or Ridge could potentially overhear the truth about Quinn and Carter and blow the whole thing to smithereens!

The Bold And The Beautiful (B&B) Spoilers: Thomas, Justin, Vinny – Do ‘Bad Guys’ Ever Change?