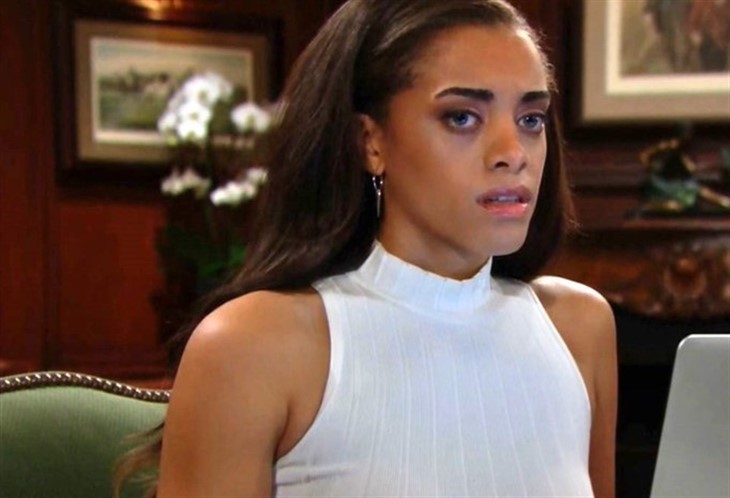 The Bold and the Beautiful (B&B) spoilers reveal that in Los Angeles Zoe Buckingham (Kiara Barnes) will come up with a new plan. She gets rid of her sister and gains everyone’s sympathy at the same time. Their sibling rivalry will skyrocket to a new level that involves Det. Sanchez (Jimmy Ray Valdez) and Lt. Baker (Dan Martin). Could Zoe frame Paris for a crime, then have her arrested?

B&B spoilers from Soap Opera Digest state that Zoe and Paris’ sibling rivalry evolves to a whole new level. No details were given, but we have to assume that Zoe is the instigator once again. With how desperate she is getting to eliminate her sister, just how far will she go?

Zoe already crossed the line on a few different occasions. Writing up her sister’s resignation letter and trying to force her to sign it was pretty unbelievable. So was the model blaming Paris for her failed seduction and getting caught in the act. Paris didn’t rat out Zoe or say where she was. Ridge Forrester (Thorsten Kaye) asked for Paris’ help, but she suddenly went mute, so he found Zoe and Zende Forrester (Delon de Metz) on his own. But somehow everything is still all Paris’ fault.

It is teased that Zoe comes up with a new plan. We don’t think it’s referring to her trying to romance her way back into Carter Walton’s (Lawrence Saint-Victor) heart. It probably is all about punishing Paris. If Carter refuses to give Zoe another chance, she’ll probably try to get with Zende even though he’s interested in the other Buckingham sister. She will be furious when she finds out that Zende is taking Paris away on a romantic getaway. Zoe thinks all her problems will be solved if she gets rid of her sister. So, what’s her new plan and why is it so evil?

The Bold And The Beautiful Spoilers – Detectives Investigate Crime

The Bold and the Beautiful spoilers reveal that Det. Sanchez and Lt. Baker will both appear in at least one episode within the next few weeks. We can’t think of what this would be about except Zoe and Paris’ rivalry going into overdrive. There will be a crime committed and for the investigation to involve Lt. Baker suggests it’s serious.

If Paris were arrested, especially while at work, it would create quite the scandal. Zoe thinks it would get Paris fired, everyone would stop loving the social worker so much, and everything would be perfect. It’s possible that Zoe will claim that Paris physically attacked her. She might even go as far as to fake cry about nearly dying at the hands of her own flesh and blood. For good measure, Zoe might even injure herself so there are bruises, cuts, or torn clothes as “evidence.”

4 Wild 'Bold And The Beautiful' Weekly Spoilers: Vinny In The Hot Seat – Flo's Redemption – Zoe Works To Get Carter Back #BB #boldandbeautiful

However, when investigators look closely enough, will they find that Paris was with someone else at the time? Was she seen on camera at an ATM during the alleged crime? Maybe she was on a phone call at the time of the alleged attempted murder. There will be something uncovered that will clear Paris. Then, Zoe will have to answer to detectives about it, and perhaps even face criminal charges. We will have to wait and see if Zoe would really go this far.