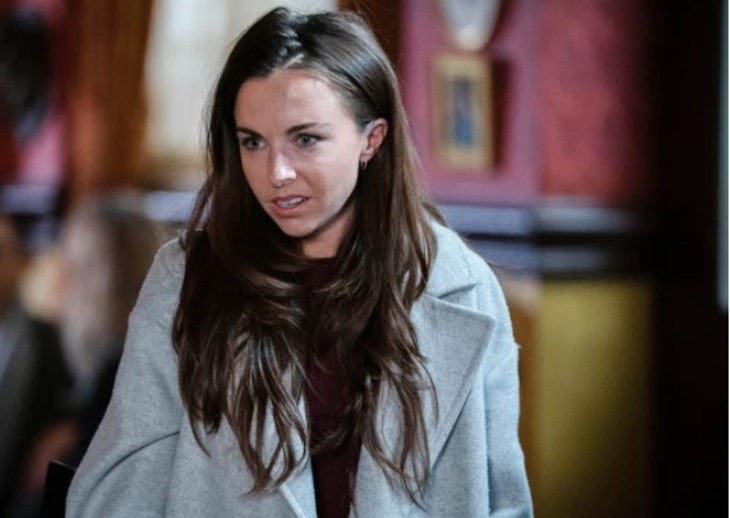 Eastenders spoilers reveal that in Walford Ruby Allen (Louisa Lytton) doubles over in pain, so Martin Fowler (James Bye) takes her to the hospital. Her miscarriage causes life-threatening hemorrhaging and she’s rushed into emergency surgery. But there’s worse news coming. Ruby could find out she’s now infertile, which she blames on Stacey Slater (Lacey Turner).

Some viewers might look at Ruby’s miscarriage, hemorrhaging, and infertility as karma. She lied about being pregnant and then tried to conceive to cover up her deceit. Once she really was pregnant, there was the concern about the discrepancy in how far along she was. Seven weeks versus 12 weeks is a large gap and would definitely be noticed during an ultrasound. So she stole another woman’s sonogram image, which Martin framed and hung on the wall.

Eastenders spoilers reveal that Ruby miscarried but that won’t be the end of the story. She tries to go to work even though Martin doesn’t think it’s a good idea. Suddenly, she doubles over in pain, so she is taken to the hospital. That is when the doctor says she is hemorrhaging from the miscarriage. She will need to have a procedure, but it could be bad enough to need emergency surgery.

Eastenders spoilers reveal that the hemorrhage could be life-threatening depending on the severity. It could even prompt doctors to rush her into emergency surgery. With miscarriage-induced hemorrhaging, there can be different causes, everything from a blood disorder to a tumor on the uterus. Most of the time it’s from an incomplete miscarriage, though. That’s when all of the tissue and matter from the fetus doesn’t leave the body. This is most likely what happens to Ruby. However, a D&C will remove everything and should stop the excessive bleeding.

According to Digital Spy, Ruby gets even more devastating news. Could it be another complication from the miscarriage? Or perhaps the surgery caused damage? Even though D&C’s are extremely common and it’s considered low-risk surgery, complications are always a risk. It’s possible that Ruby will be told that she is now infertile.

Now she will tell Martin about Stacey and Kush Kazemi (Davood Ghadami) locking her in the office and forcing her to take a pregnancy test. She will tell him about falling down the stairs, but won’t say it was an accident. Instead, she claims Stacey pushed her down the stairs, which killed their unborn child. Now she’ll blame Stacey for the infertility. Even though Stacey apologizes to Martin, how will he react? Will he learn the truth, cut ties with Stacey, or will grief and rage lead to him doing something worse? If so, it will all be Ruby’s fault. When will enough be enough?