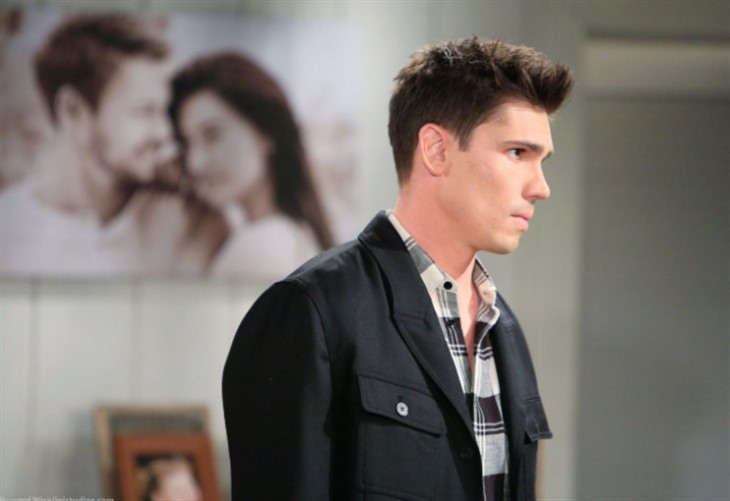 The Bold and The Beautiful (B&B) spoilers tease that in Los Angeles Dr. John “Finn” Finnegan (Tanner Novlan) will recognize a familiar face in an unfamiliar place in an upcoming episode of The Bold and The Beautiful! The place may not be unfamiliar to Finn, but it definitely will be unfamiliar, or should be, to the person Finn spots – is Thomas Forrester (Matthew Atkinson) in the hospital lab?

Viewers of The Bold and The Beautiful will remember that Thomas tried unsuccessfully to get Vinny Walker (Joe LoCicero) to admit he altered Steffy Forrester’s (Jacqueline Macinnes Wood) paternity test to show Liam Spencer (Scott Clifton) as the father of her baby. Vinny had been nagging at Thomas that he should seize this perfect opportunity to get Hope back, even though Thomas is no longer the scheming, obsessive person he was. He cares for Hope but he’s no longer obsessed with having her or her love.

Thomas just wants the best for her and he can tell how much Hope is hurting. The paternity test showing Liam as the father is hurting both his sister and his friend badly, and Vinny has made just too big of a deal about that Thomas should get Hope back! He noticed that Vinny knows a lot about paternity tests, knows he’s been working in the hospital lab, and sees it as motive, means and opportunity to alter the test! Thomas knows that he has to do something. He has got to somehow get a look at the original test and see what it says for himself- and the only way he can do that is to go to the lab and look in the files! Getting into the hospital lab may be a little more complicated than he thought though…and not getting caught at it even more complicated!

B&B Spoilers – Thomas Forrester Is Interrupted In His Mission

Thomas hopes maybe to be mistaken for Vinny as he sneaks in the lab, behind someone else who is not paying attention. He snagged a lab coat from a hanger and tries to find the test results but then a familiar voice startled him. “Thomas? Is that you?” and he wheels around to see Finn! Finn, of course wants to know what Thomas is doing in the hospital lab and asks him what he’s looking for, after reminding him of HIPAA laws! Thomas has no choice but to bust Vinny to Finn. Finn takes him into an empty examining room for privacy. He explains the whole spiel that his lifetime buddy since childhood laid on him and why he worried that Vinny altered the paternity test, after cautioning Finn not to get his hopes up too much!

He doesn’t want Vinny to get fired but he does want the truth to come out if Finn really is the father and not Liam! Everyone concerned is hurting more than they would need to if the test results had been altered! Finn says he will figure something out – Thomas means well even though he could be construed as committing a crime. Finn has the proper access to the hospital systems as a doctor practicing there and he has the proper reasons to want to see the test for himself.

Vinny could not have altered the raw materials or the original results, only the interpretation that would have been printed out. Lab personnel key in those results to be printed out but they cannot alter anything with the materials used. Finn will take it from here, and tells Thomas to ditch the lab coat and keep things to himself until Finn interprets the results for himself!