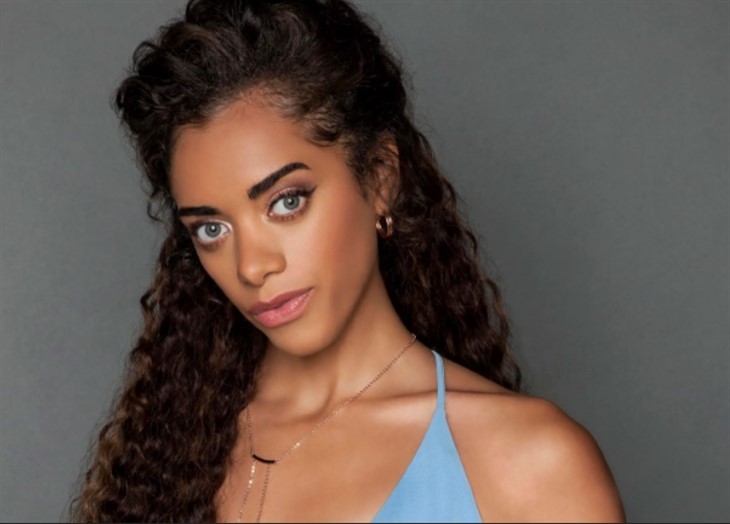 The Bold and the Beautiful (B&B) spoilers divulge that Kiara Barnes (Zoe Buckingham) is in a dazzling front burner plot at the moment, one that shows off her acting skills to the utmost!

The beautiful and talented actress talked to South Africa’s News 24 recently about the importance of diversity in entertainment and gave a preview of what’s in store for Zoe.

The Bold and the Beautiful spoilers: Zoe Buckingham is a Force of Nature

Barnes stated that she is a proud supporter of the Black Lives Matter movement. She was asked about being a role model and this is what she had to say: “It’s a great honor that people would hold me in such regard. I’m so grateful to be where I am, and in the position, I am with my career.”

She went on to say that, “BLM is just a way of life for me; it’s how I grew up and what I’ve experienced. The hope is that people become more aware and have these discussions at home, speak up for those who feel compromised to do so, and make changes outwardly and inwardly by informing themselves.

She added that she has some big goals she would like to enact and hopefully can play a bigger part in diversifying the entertainment world saying, “I want to be able to bring people of color into roles that aren’t just one-sided or stereotypical.”

Kiara’s run on B&B has been very eventful. Her character Zoe Buckingham has been involved in a baby swap, a stalking romance, and she was a jilted bride at the altar.

Now she is caught between two men, and seems to have lost both! She was engaged to brave knight Carter Walton (Lawrence Saint-Victor) but when hunky alpha male Zende Forrester (Delon deMetz) came on the scene her eyes did a double take and things haven’t been the same since.

The Bold And The Beautiful (B&B) Spoilers: Liam Wages War – Takes Finn Rivalry To Next Level?https://t.co/Y5OcmEhQ07

Complicating matters is her younger, more accomplished sister who seems to have caught the eye of both men. On the plus side Paris Buckingham seems to have none of the baggage that Zoe does, and she’s easy on the eyes just like her big sis Zoe.