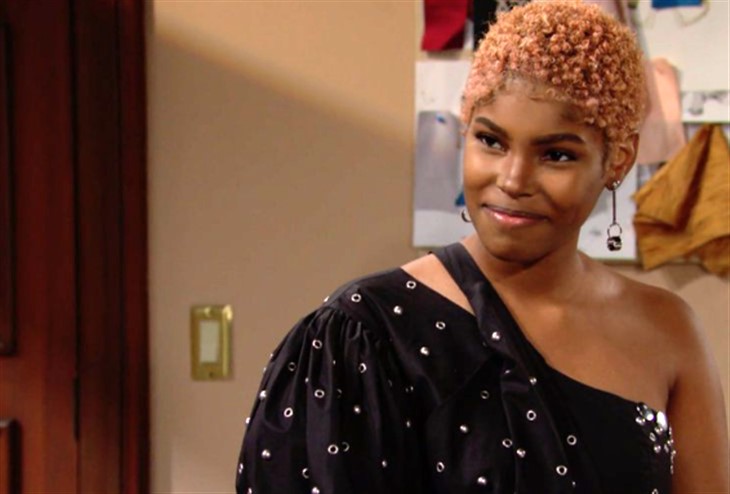 The Bold and the Beautiful (B&B) spoilers document that in Los Angeles Zoe Buckingham (Kiara Barnes) appears incapable of changing. Unwilling to accept the reality that her own actions created direct consequences, Zoe persists in blaming her sister, Paris Buckingham (Diamond White), for her problems.

Paris has done nothing wrong. The audience knows that plot point can be proven. But logic doesn’t matter to Zoe, who begins working with Quinn Fuller Forrester (Rena Sofer), a well-known trouble-maker herself, in order to disrupt Paris’ budding romance with Zende Forrester Dominguez (Delon de Metz).

The Bold And The Beautiful Spoilers – The Genesis Of It All

Fans were privy to an enlightening exchange a number of weeks ago. In it Zoe told Paris she was behaving like she did when they were kids. And there is was.

Zoe was bothered by Paris having shadowed her during childhood. Barnes’ character felt that White’s character restrained her growth then and is doing so now. That’s not the mentality of a generous soul, but a totally self-absorbed person.

The audience knows little about whatever parental influence they had, other than Reese Buckingham (Wayne Brady) is their dad. He’s the doctor who stole Beth Spencer (Madeline Valdez and River Davidson) from Hope Spencer (Annika Noelle) and Liam Spencer (Scott Clifton) at birth and sold her to Taylor Hayes (Hunter Tylo) so that Steffy Forrester (Jacqueline MacInnes Wood) could provide Kelly Spencer (Avalon and Colette Gray) with a sister.

The complexity of the last paragraph is intense, whereas the driving reason behind Zoe and Paris’ sibling rivalry is simple. Zoe is shallow.

Zoe has convinced herself that she can live with Carter Walton (Lawrence Saint-Victor) becoming her husband. The problem is that his engagement offer was tersely rescinded.

Carter was naturally stunned and angered when learning that he was Zoe’s backup plan. He subsequently canceled Zarter’s marriage plans, which left Zoe reeling. So, because her romantic life is crushed, she doesn’t want to see Paris’ personal life advance at all.

But Zoe isn’t giving up on Carter. Distracted for the moment with sibling games, she is still pursuing a long-term goal. Zoe believes that Carter will be her spouse, eventually.

The Bold And The Beautiful Spoilers – Paris Buckingham Has Control

Paris is in control of herself. Zoe remains unable to keep her emotions in check, which is the source of break patterns.

As fans recall, Xander Avant (Adain Bradley) had enough of Zoe’s chaotic life and left town. Then, Thomas Forrester (Matthew Atkinson) certainly wronged her. However, she saw him as a ticket to marrying up and shouldn’t have accepted his marriage proposal.

Carter recognized that Zoe also believed he represented a way to socially climb up the ladder in Los Angeles, California. He resented being walked on. And Zoe left those lasting footprints, not Paris.