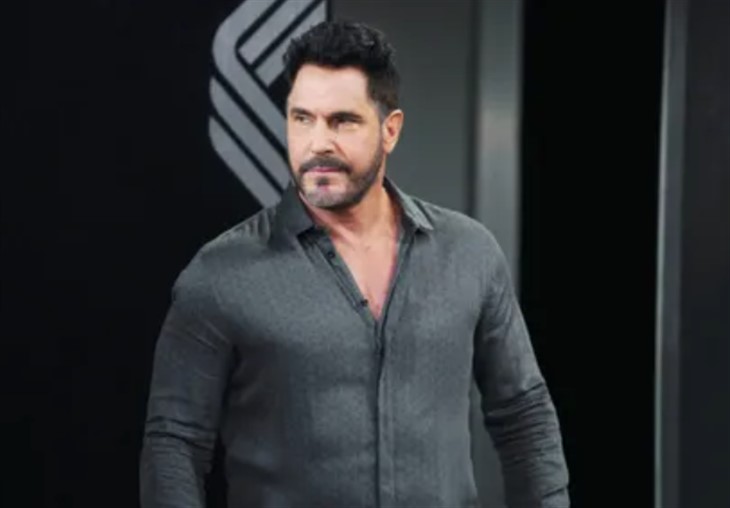 The Bold and the Beautiful (B&B) spoilers reveal that in Los Angles Bill Spencer (Don Diamont) is at the center of the murder mystery. It is stated that he decides that extreme measures must be taken to protect the innocent. It is also confirmed that he “fully engages” in a cover-up. However, is the cover-up to protect him or someone else? Nothing is as it seems when it comes to this storyline.

The Bold And The Beautiful Spoilers – Bill Spencer’s Cover-Up

B&B spoilers reveal that during the week of April 5, there will be a shocking murder. It seems that a lot of characters will come under suspicion. They are either involved somehow, know something about it, or it just may look that way. When it comes to Bill, the new issue of Soap Opera Digest states that he decides that he must take matters into his own hands. The publication also teases that Bill “fully engages” in a cover-up, but it’s to protect the innocent.

When one thinks of protecting the innocent, children come to mind. However, the statement about Bill protecting the innocent might not be referring to victims of the deceased. It could be indicating that Bill is protecting the killer, who he sees as innocent. For some reason, they might not be responsible or shouldn’t be blamed for the death. It might have been a tragic accident. Perhaps the police would never believe it was an accident due to the identities of the killer, as well as the victim.

The Bold And The Beautiful Spoilers – Hope Logan Identifies Body

The Bold and the Beautiful spoilers reveal that we do have some clues on the person who dies. The head writer gave six characters at risk of being killed off: John “Finn” Finnegan (Tanner Novlan), Katie Logan (Heather Tom), Flo Logan (Katrina Bowden), Thomas Forrester (Matthew Atkinson), Vinny Walker (Joe LoCicero), and Shauna Fulton (Denise Richards).

Out of those, it has to be someone that Hope Logan (Annika Noelle) knows well. She’s asked to identify the body and it’s stated that she rushes to the hospital to do that. So, we are thinking it’s Thomas because they call Hope. They didn’t contact Ridge Forrester (Thorsten Kaye), Brooke Logan Forrester (Katherine Kelly Lang), or Steffy Forrester (Jacqueline MacInnes Wood). If anything happened to Thomas, Hope is probably on his emergency contact lists. If it were anyone else, their closest family members would be called first.

B&B Spoilers – Nothing As It Seems

It is teased that nothing is as it seems with this murder mystery. Although, we can imagine Thomas and Liam Spencer (Scott Clifton) getting into an argument. One of them pushes a bit too hard and suddenly there’s a dead body on the ground. It would also explain why Bill covers up the crime. He obviously considers Liam innocent and everything Thomas put “Lope through.

The Bold And The Beautiful Spoilers: Brooke Snaps Over Hope’s Decisionhttps://t.co/Pl0HoaQ8Un

There have also been many mentions by Bill on how Liam is always messing up, especially with Hope. He even stated that couldn’t help Liam fix the mess this time. So, that might have been a hint that Bill will once again have to clean up Liam’s mess.

Plus, we know Liam misses his date with Hope. It’s his second chance with her and he wouldn’t jeopardize that unless something truly serious happened. However, it is stated that nothing is as it seems with this murder mystery and it’s a complex story. Maybe Bill just assumes that Liam killed Thomas. We can certainly see that happening. So, we will have to wait and see what happens when this storyline kicks off on April 5.

General Hospital Spoilers: Will Elizabeth Webber Have A Change Of Heart About Jason Morgan?