The Bold And The Beautiful (B&B) Spoilers: Liam Arrested, Bill Tricked Into Confessing 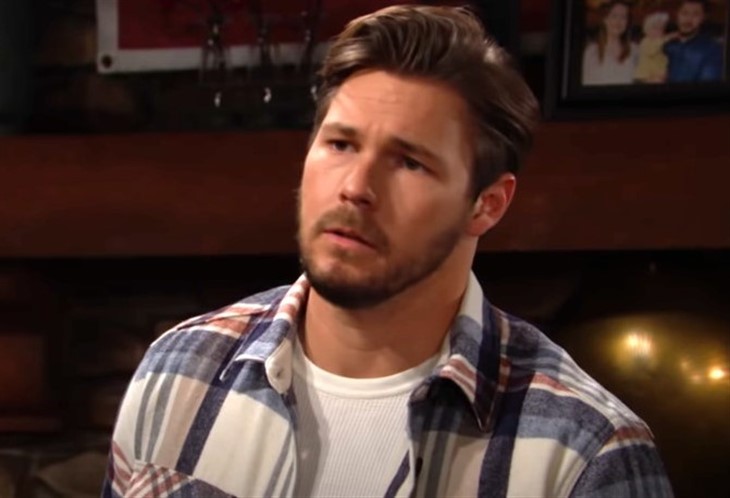 The Bold and the Beautiful (B&B) spoilers reveal that Vinny Walker’s (Joe LoCicero) murder mystery is winding down. Next week, Liam Spencer (Scott Clifton) turns himself in and admits to the hit-and-run. Bill Spencer (Don Diamont) tries to stop the confession but it’s too late. Then, Bill is tricked into confessing his role in the criminal cover-up.

The Bold And The Beautiful Spoilers: -Liam Spencer’s Admission And Arrest

B&B spoilers reveal that the murder mystery for May Sweeps featured Liam’s massive guilt. Even though he didn’t mean to turn Vinny into roadkill, that is what appears to have happened. We are still holding out for a shocking conclusion that will prove someone else actually killed Vinny. Liam’s guilt and secrecy were leading him to insanity. If he hadn’t finally told Hope the truth, Liam would have quickly spiraled out of control.

When Liam turns himself into police, he only admits to what he did that night. He will keep Bill’s name out of the police confession. Even when Liam is charged and arrested, he will continue staying silent.

The whole reason why Bill took extreme measures that fateful night was to protect his son. He is all too familiar with how easily an innocent person can be sentenced to prison. Even though the criminal cover-up began as Bill protecting Liam, it will switch gears. We will see an example of the role reversal when Liam pays it forward and keeps quiet about Bill’s cover-up.

This was not a random stranger that was mowed down. Vinny switched Steffy Forrester’s (Jacqueline MacInnes Wood) paternity results. There were a lot of people hurt by Vinny’s scheme. The person that probably was destroyed the most was Liam. Vinny was arrested but got out on bail. When Liam found out the manipulator had been released, Liam told Hope that he wanted to kill Vinny. Plus, police will probably come up with all kinds of “evidence” of Liam’s hatred toward Vinny.

The Bold and the Beautiful spoilers reveal that Hope was furious at Bill for covering up the crime. She also blames Bill for Liam’s mental health struggles resulting from keeping the hit-and-run a secret. When Liam confesses to the police, Chief Deputy Bradley Baker will listen to Liam’s story and place him under arrest.

Meanwhile, Bill is strutting around Spencer Publications, still a free man. Hope is not going to allow Liam to take the fall for everything. He is only responsible for striking Vinny with Bill’s favorite car.

The Bold And The Beautiful Spoilers – Confession Trickery

Hope also believes that Liam would have done the right thing that night if Bill hadn’t been there. As a result, Liam could go to prison and Hope will be left all alone. We have seen Hope be portrayed as a symbol of good. She has been called “an angel on Earth,” and other phrases.

We have seen her be betrayed by Liam over and over. When the Waffle King isn’t bouncing between beds, he either keeps secrets, vents about who he distrusts that week, or roams the houses of his former flames. Maybe it’s time for Hope to go a little bad.

Royal Family News: Prince Harry Insists He Is WOKE Forgetting His UNWOKE Past