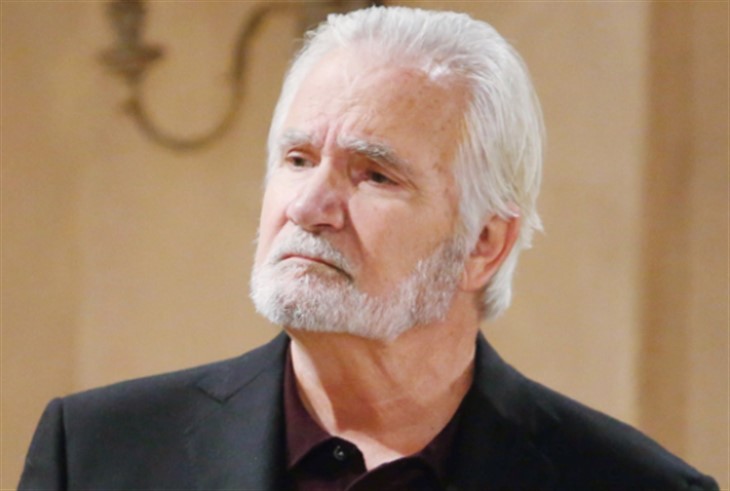 Bold and the Beautiful spoilers and updates reveal Eric Forrester (John McCook) has been having trouble with his marriage. He and his wife Quinn Forrester (Rena Sofer) have been estranged. Eric has been upset with Quinn because she interfered with his son Ridge Forrester (Thorsten Kaye) and Brooke Logan Forrester’s (Katherine Kelly Lang) marriage. Quinn believed that her friend Shauna Fulton (Denise Richards) would be a good match for Ridge. She tried to put Ridge and Shauna together.

However, her attempts failed but it has put a strain on her marriage to Eric. Quinn has been trying to win Eric’s trust back but has not been able to get him to intimate with her. Quinn has been talking about her marriage to Carter Walton (Lawrence Saint-Victor). They have been commiserating over their relationship problems. Carter has been having trouble with his relationship with Zoe Buckingham (Kiara Barnes). Quinn was trying to help Zoe get Carter back. However, Quinn has found herself sleeping with Carter instead. Quinn is going to have even more trouble with her marriage to Eric because of the affair.

Eric will be devastated to find out that Quinn has cheated on him with Carter. He had been trying to get past Quinn’s efforts to sabotage Ridge and Brooke’s marriage. He may find that he will want to separate from Quinn. Eric needed to go on a business trip. He talked to his former wife Donna Logan (Jennifer Gareis) about his marriage to Quinn. Donna was supportive of Eric. She reminded him of their time as a married couple. She even called him Honeybear which is the nickname that she would call him in the past. Donna helped to adjust Eric’s tie when Quinn came in. Eric could remember that Donna was an important part of his life at one time. He could decide that she is the one he will turn to when he finds out about Quinn and Carter.

B&B Spoilers – Eric Forrester May get With Shauna Fulton

Eric may decide when he finds out that Quinn cheated on him with Carter to throw caution to the wind. He may decide to turn his attention to Shauna. Eric knows that Shauna is Quinn’s best friend. They have a long relationship that goes back years. Shauna and Quinn reunited when Shauna’s daughter Flo Logan (Katrina Bowden) came to Los Angeles, California. Flo had some trouble before she found out that she was part of the Logan family. She reunited with her childhood sweetheart Wyatt Spencer (Darin Brooks). Quinn and Shauna have been happy that their children have found each other again. However, Quinn and Shauna may be at odds if Eric decides to turn his attention to Shauna when he finds out that Quinn has been unfaithful to him.

Bold and the Beautiful Eric will need to find a way to deal with Quinn’s betrayal. He may not be able to forgive her for sleeping with Carter. Could Eric find a way to forgive Quinn? Eric and Quinn could stay together if he can forgive her. However, he may not be able to get past the affair. He may find comfort in Donna. Would they find the love that they once had? He might find new love with Shauna. Would Shauna help Eric forget Quinn even though she is Quinn’s friend? Tune in to Bold and the Beautiful to find out who Eric will find love with again.