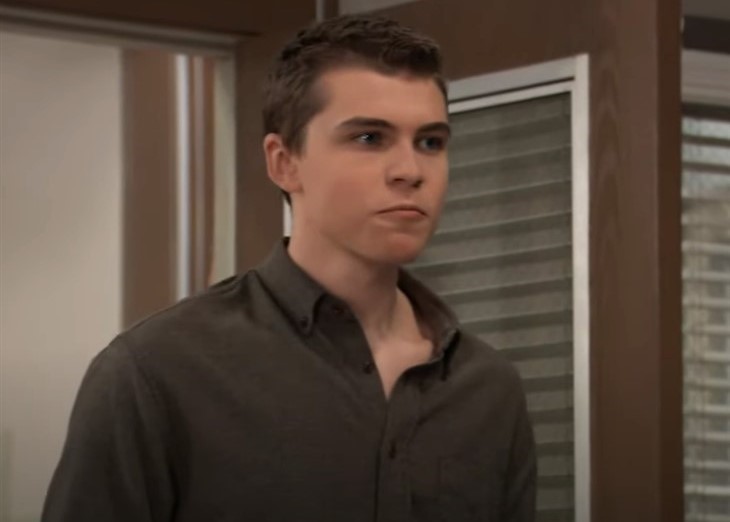 General Hospital Spoilers (GH) tease that Cameron Webber (William Lipton) and his obsession with Jason Morgan (Steve Burton) almost had some very serious repercussions when he stumbled upon Jason’s escape attempts from police custody. Cameron believes that Jason murdered his stepfather Franco Baldwin (Roger Baldwin) and ever after confronting Jason at the hospital,

Cameron still couldn’t let go of his anger. He came across a gun that one of Jason’s pursuers had dropped. To make matters worse, that’s exactly the moment Police Commissioner Jordan Ashford (Brianna Nicole Henry) arrived and a freaked out Cameron pointed the weapon right at her. Jordan eventually talked Cameron down, but she had no choice but to arrest him when it looked like he had shot Jason as he tried to escape. He was later cleared of any wrongdoing when the bullet that hit Jason came from somewhere behind Cameron.

General Hospital Spoilers – Will Cameron Webber Try To Go After Peter August Like He Did Jason Morgan.

Now that Cameron has been told that Jason didn’t kill Franco and that the guilty party was actually Peter August (Wes Ramsey) will Cameron try to confront Peter as he did with Jason? Cameron might actually have some evidence that could help make a case against Peter. The day Franco was killed, Cameron brought him a phone that had a message from when Franco believed himself to be Drew Cain (Billy Miller). It details everything that Franco remembered about Peter’s involvement in several criminal activities.

And since it was common knowledge that the “Drew” memories seemed to be coming back it gives Peter a motive for murder. But Peter isn’t about to go down that way, so he will likely either threaten Cameron or actually make an attempt on the teenager’s life. Peter isn’t about to let a teenager take him down. Another issue is that Peter told Anna Devane (Finola Hughes) that if people continued to accuse him of Franco’s murder, he would withhold the serum that can save Harrison Chase’s (Josh Swickard). Peter warned Anna that if people continued to make those allegations then he would let Chase die.

Cameron has been walking around with a huge chip on his shoulder ever since Franco died, He’s even been openly defiant with his mother, Elizabeth Webber (Rebecca Herbst) especially when it came to the subject of Jason. But Peter is much more dangerous than Jason at least when it comes to Cameron, so Elizabeth will have to warn Cameron that he needs to stay away from Peter? But will he? Elizabeth has realized that Cameron certainly is in need of some therapy. He’s been through quite a bit the last couple of years, But it would be a shame if he continues down his current path and does something that he can’t undo or take back.

If Cameron didn’t shoot Jason, then who did? Was Jordan lying to save Cameron or was there another shooter? And now that Cameron knows that Peter is guilty, will he make the same mistakes all over again? Therapy can be a very helpful tool for anyone at times, not just in Port Charles, so stay tuned to General Hospital airs weekdays on ABC. And don’t forget to check back right here regulary for all your General Hospital news, information, and spoilers!