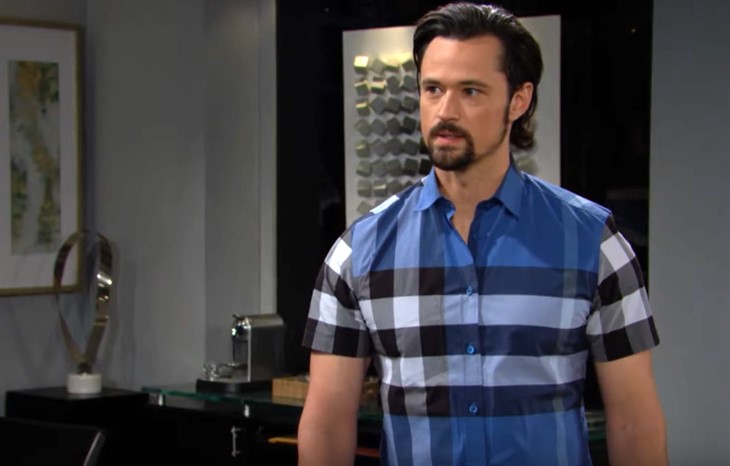 The Bold and the Beautiful (B&B) spoilers indicate that in Los Angeles Thomas Forrester (Matthew Atkinson) may have finally redeemed himself.

During the past few years, B&B fans watched as a legacy character’s reputation was destroyed. Thomas turned into a psychopath because of his obsession with Hope Logan (Annika Noelle).

A traumatic brain injury was the cause for Thomas’ odd behavior, many weren’t sympathetic towards him. Although Thomas was on the road to redemption following surgery, there were still plenty of people who were skeptical on whether he’s changed.

But with Thomas helping to free Liam Spencer (Scott Clifton) from prison, may have everyone changing their tune about him.

Thomas got his wish for justice following Liam and Bill Spencer’s (Don Diamont) arrest. However, Thomas was in for a shock when he unearthed a video from his phone. Prior to his death, Vinny sent Thomas a message saying how sorry he was and that he was going to kill himself.

Realizing Vinny’s death was a suicide, Thomas wanted to go to the cops. However, he made the mistake of telling Justin Barber (Aaron D. Spears). Wanting to keep the secret under wraps so he could take over Spencer Publications, Justin locked Thomas in a cage.

Thomas’ days of being locked up didn’t last long because Hope came to his rescue. The two then went to see Lieutenant Bradley Baker (Dan Martin) with evidence to prove Liam’s innocence. Before Liam could be transferred to another prison, he was freed and shared an emotional reunion with Hope.

Liam and Hope’s reunion wouldn’t be possible without Thomas. Thanks to the video, he was able to help free Liam. Of course, Liam along with everyone else is going to be shocked Thomas helped him. Given Thomas’ past, they figured he would’ve kept this quiet to woo Hope.

Yet, Thomas knows how much Hope loves Liam. All he wants is for her to be happy, and Liam is the one who can do that.

The Bold And The Beautiful Spoilers – Thomas’ Forrester Redemption Complete

In recent years, Thomas has been made to be a villain, while Liam is the hero. Although many B&B fans will disagree with this assessment.

With Thomas rescuing B&B’s golden boy, this is going to have everybody seeing him in a different light. They’ll realize how unselfish he is, and he did the right thing by helping Liam and Hope. All his doubters will now be offering him gratitude for saving them.

Although Thomas’ redemption arc will be complete, it’s also a bittersweet moment. As fans know he still carries a torch for Hope. Many thought this storyline would be a way to bring Thomas and Hope together. However, B&B did the opposite.

While Hope and Liam are free to go about their lives, Thomas is left out in the cold. But with him being a good guy again, he can move on with his life, possibly with a new lady.