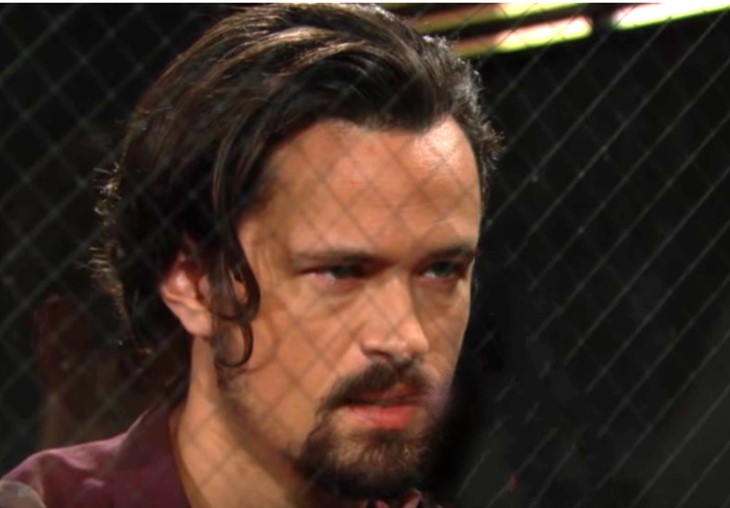 The Bold and the Beautiful (B&B) spoilers reveal that Thomas Forrester (Matthew Atkinson) turns to Justin Barber (Aaron D. Spears). He finds evidence that clears Liam Spencer (Scott Clifton) of murder and hands it to the lawyer on a silver platter. However, Justin has an unexpected response. He knocks Thomas out and locks him in a cage underground.

The Bold And The Beautiful Spoilers – Vinny Walker’s Text Messages

B&B spoilers reveal that Thomas thought a stranger hit Vincent “Vinny” Walker (Joe LoCicero) and left him to die. He was shocked to find out that Liam confessed to the crime. Then, he got another bombshell when he heard that Bill Spencer (Don Diamont) actually covered up the crime. Now, he is going to get a series of more bombshells relating to Vinny’s death.

Thomas reads old text messages from his best friend. Remember, Thomas had blocked Vinny’s number, so these texts were never seen before.

Thomas realizes that Liam isn’t guilty of murder. Despite their volatile history, Thomas only wants the real killer behind bars. When he finds out that the killer is not who he thought, he turns to Justin. According to actor Matthew Atkinson’s interview in the new issue of Soap Opera Digest, Thomas hands the evidence to Justin on a silver platter. It will be more than enough to get both Liam and Bill released from jail.

The Bold And The Beautiful Spoilers – Thomas Forrester Locked In Cage

The Bold and the Beautiful spoilers reveal that Justin doesn’t react the way Thomas expects. First, Justin knocks out Thomas and he is passed out cold. When Thomas wakes up, he is locked in a cage. The building that he is in is an underground level and there are “caution” signs everywhere. Thomas doesn’t understand what is happening and has no idea why Justin is doing this.

It is teased that we won’t find out if Justin killed Vinny or not until next week. What was revealed in the interview is Justin’s reaction. He doesn’t appreciate the way Bill yelled at him during the most recent jailhouse visit. Justin is doing everything he can to help Bill and Liam. Then, Bill screams at him and accuses him of not doing enough? That’s not the only reason, though. Justin wants Spencer Publications for himself.

As we previously speculated, Justin is a lawyer and that means he most likely has power of attorney. Whether Bill signed those papers or they were forged isn’t known yet. However, Justin was about to get the company when Bill got shot a few years back. Then, it slipped from his fingers when the truth came out. However, this is a completely different situation. Will Thomas be able to convince Justin not to go through with his horrific plan or will Thomas — as well as Bill and Liam — goners?