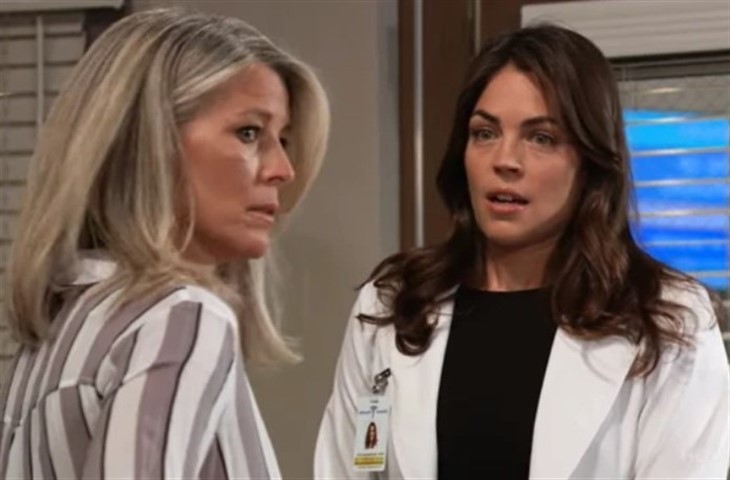 General Hospital (GH) Spoilers indicate that Carly Corinthos (Laura Wright) is once again jealous of another woman paying attention to Jason Morgan (Steve Burton). Carly eventually accepted that Jason loved Sam McCall (Kelly Monaco) but it took years for her to finally stay out of it.

In fact, she actually played matchmaker for Jason and Sam when Jason first returned to Port Charles and Sam was happily involved with Drew Cain (Billy Miller). But now that Sam and Jason have seemingly separated for good, it seems as though Carly once again wants Jason all to herself. Or at the very least, she doesn’t want anyone to have him.

Jason and Dr. Britt Westbourne (Kelly Thiebaud) have been growing closer over the last few months. Britt was unsure when Jason first approached her about Cyrus Renault’s (Jeff Kober) plans for General Hospital, but after she looked into it for herself, she realized that Jason was right and Cyrus was the one behind the influx of drugs in Port Charles. Britt had observed and was angered by the increase in drug overdoses since her last stint in Port Charles and so she agreed to be Jason’s mole at the hospital.

When Jason was arrested for Franco Baldwin’s (Roger Howarth) murder, a crime actually committed by Peter August (Wes Ramsey), Carly arranged for Jason to be stabbed and taken to General Hospital. With Britt’s help, Carly and Damian Spinelli (Bradford Anderson) planned to facilitate Jason’s escape. But when Jason noticed Britt was still at the hospital even though she had promised to go somewhere very public as an alibi, Jason ran back to the hospital and located Britt in her office.

But she wasn’t alone. According to General Hospital spoilers, Cyrus had finally realized that Britt was helping Jason and sent his men to kill her. Jason saved her and the two took off. Unfortunately, Jason was shot just before making it to the getaway car. Once the arrived at the safe house, Britt wasted no time and removed the bullet. After a blood transfusion from Carly, Britt was able to make sure Jason lived! Carly was thankful of course.

Jason and Britt were on the run together for several weeks and grew even closer, eventually making love. It wasn’t long after that when Jason had to return to Port Charles to assist Carly when Spinelli was kidnapped by Cyrus. Not wanting to leave Britt alone, Jason told her mother Dr. Leisl O’Brecht (Kathleen Gati) where to find Britt and when Cyrus was finally no longer a threat, they returned to Port Charles as well. Britt and Jason went out in public together and an unhappy Carly witnessed them holding hands. She pressed Jason for details but decided to go a step further and confront Britt. Carly of course will attempt to scare Britt away, perhaps even going as far as to insinuate that either she or Sam are the only women Jason needs!

Britt will decide for herself whether she wants to see Jason or not on General Hospital. She is quite unlike any of the other women that Jason has been involved with and she likely won’t back down if she and Jason decide to become a couple. This will likely infuriate Carly, who might even go as far as to seduce Jason and have Britt catch them. Or she may once again try to play matchmaker for Jason and Sam. Either way, it will take Jason himself stepping in to get Carly to back down. But will he?

General Hospital Comings And Goings: What High-Profile Actress Is Leaving The Showhttps://t.co/P1BHF1gCzs

Can Britt and Jason be a romantic couple now that the danger is over? Will Carly decide she wants Jason for herself. Or will she try to play matchmaker between Jason and Sam? How will Britt handle Carly’s constant interference? Will Jason finally have enough and step in? Jealousy can lead to all kinds of bad behavior in Port Charles so stay tuned to General Hospital airing weekdays on ABC!