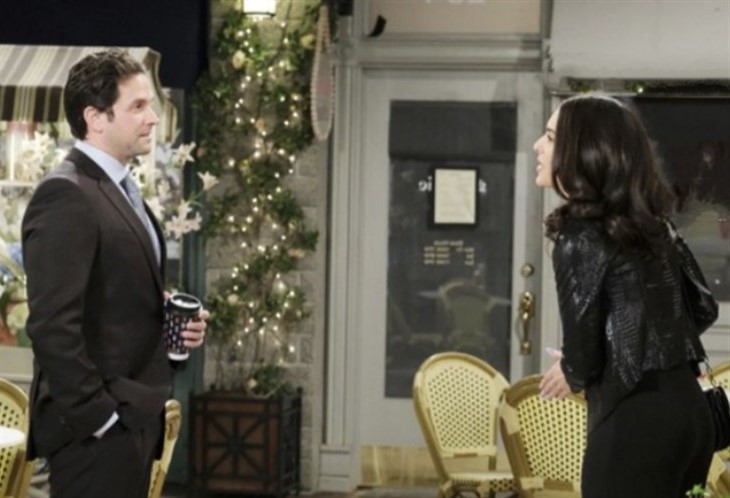 Days of Our Lives (DOOL) spoilers tease that Gabi Hernandez (Camila Banus) and Jake DiMera (Brandon Barash) will work together to stop his brothers’ coup in an upcoming episode of Days of Our Lives!

Days Of Our Lives Spoilers – EJ DiMera, Chad DiMera And Tony DiMera Have Banded Together To Oust Jake DiMera From The Company

Days of Our Lives viewers will recall that Tony DiMera (Thaao Penghlis) was the one to put in EJ DiMera’s (Dan Feurreriegel) head that he should run DiMera Enterprises instead of that “garage mechanic” Jake DiMera! EJ decided Tony was right and then they convinced Chad to join in since Chad wants to concentrate on his family instead of the family business. Still, three DiMeras are better than two when trying to overthrow an outsider! Days of Our Lives viewers know that those DiMeras who actually knew their father, Stefano DiMera (Joseph Mascolo) are kind of legacy snobs, so to speak.

They think they are better than some interloper born via Vivian Alamain (Linda Dano) and they thought the same of Jake’s late twin Stefan DiMera (Brandon Barash). But at least Stefan came from the world of business as a corporate raider, and not just the world of grease monkeys like Jake! Stefan at least had some business savvy, although Chad hated him enough to leave DiMera and work for Titan for a short time! Chad eventually came back to the family fold and family business, however. He chose to run the Paris, France office for a while and he and his family moved there for a couple of years before moving back to Salem. Chad returned to a company he nearly didn’t recognize, after Gabi having been in charge of it!

Days of Our Lives viewers will remember that after Stefan died, Gabi was in charge of DiMera Enterprises for a period of time, until Chad and his family returned. Gabi had taken advantage of having access to some of DiMera’s more unusual divisions, such as the one that made a remotely controllable pacemaker that could be used to control or kill an enemy who might have said pacemaker implanted in them! That is the same division that implanted an artificial eye in Steve Johnson (Stephen Nichols) with spyware in it – that took photos of secret documents and sent them to the highest bidder!

That little stunt cost Steve some years of life, having been charged with espionage that was not intentional or planned on his part at all! But then, longtime Days of Our Lives viewers will recall that Stefano was always quite interested in strange technology – like a watch he could control people with via satellite! Gabi had some favor with Li Shin (Remington Hoffman) for a while – until she didn’t! But Gabi has one talent that Jake doesn’t – and that is how to plot and connive! She is also a skilled manipulator, which is one thing Jake isn’t. Jake is far too trusting and naïve, and Gabi knows it. Jake may not like the employment of dirty tricks to keep DiMera under their control and out of the terrible three’s, but right now, that is all he has!