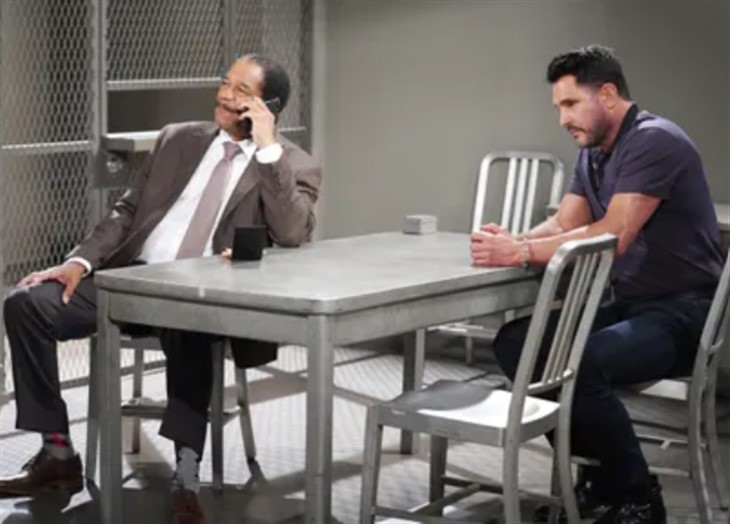 Viewers of The Bold and The Beautiful will remember that Bill covered up the hit and run that he and Liam had been involved in for months now. Liam had been driving Bill, who legally had a bit too much to drink, on a dark road on a dark night and failed to avoid Vinny Walker (Joe LoCicero) who had suddenly appeared in the road in front of him, even though he had swerved. As a result, Vinny died from his injuries, and Liam had fainted. Bill thought Vinny was dead, anyway, but honestly, he didn’t care.

Vinny had deserved to die as far as Bill was concerned for messing up Steffy Forrester’s (Jacqueline Macinnes Wood) paternity tests. Viewers of The Bold and The Beautiful will recall that Bill acted exactly like a criminal as he destroyed all the evidence he could, including stupidly tossing Vinny’s wallet and cell phone over a bridge into the city below without wiping off his own fingerprints – which could still prove to be his undoing! All Deputy Chief Bradley Baker (Dan Martin) has on Bill and Liam is Liam’s confession and Bill’s confession, and he had to discern whether they were merely covering up for the other one and had no choice but to put both of them in jail!

Now Dollar Bill hasn’t given their attorney, Justin Barber a whole lot to work within the way of any type of defense, although he could possibly go for circumstantial versus no evidence. Liam has been so off-kilter that Barber is tempted to advise an insanity plea, but the only problem with that is an insanity plea doesn’t actually hinge on a person’s mental health status – it is based on whether the person knows between right and wrong. Liam definitely knows between right and wrong and his confession and his guilt is why he’s where he is!

Wyatt was asking too many questions, and like Liam, was being too honest and Bill explodes at him for his honesty and concern! Wyatt has likely come to visit his dad and brother in jail and failed to bail them both out. The Bold and the Beautiful spoilers tease Wyatt would be the only Spencer who could try to arrange bail since Hope Spencer (Annika Noelle) has not even tried. But as viewers of The Bold and The Beautiful will recall, Bill confessed in an attempt to cover for Liam, and Liam confessed out of guilt, and Baker had no choice but to put both of them in jail.

Dollar Bill himself made the whole nightmare for himself and Liam in not doing the right thing, to begin with, and even though Attorney Barber is not trying to rub it in his face, he too is honest with Bill and Liam – Bill is the one who made this whole scenario a crime! Bail is not a possibility when there are confessions of guilt, and Attorney Barber wishes the two Spencers would have come to him first! Bill explodes at Attorney Barber and his son Wyatt for not getting their jobs done properly!