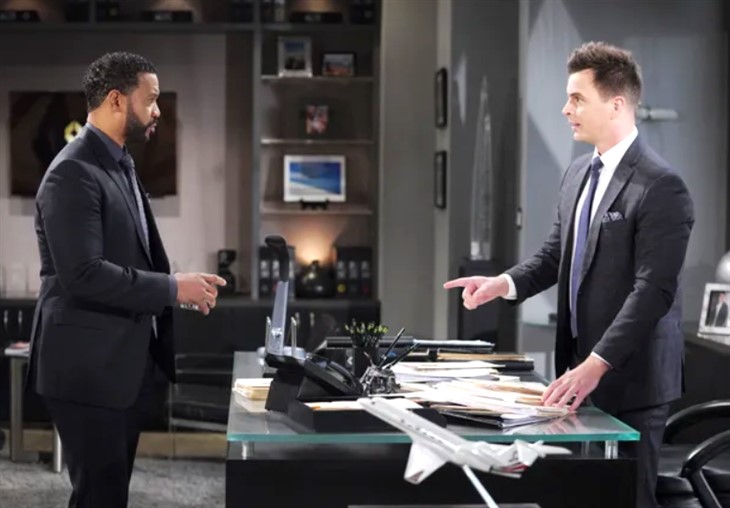 The Bold and the Beautiful spoilers reveal that Justin Barber (Aaron D. Spears) has turned on Bill Spencer (Don Diamont). As Bill and Liam Spencer (Scott Clifton) face prison time, Wyatt Spencer (Darin Brooks) demands answers. He wants to know the details about Justin’s legal strategy. How will the lawyer deal with all the questions while keeping his plan under wraps?

The Bold And The Beautiful Spoilers – Wyatt Spencer Loses His Temper

B&B spoilers reveal that Wyatt is frustrated, overwhelmed and stressed out. He doesn’t know what is going to happen to Bill and Liam. They are still in county jail as both were denied bail due to flight risk concerns. We are sure that Justin could have changed that but he doesn’t want Bill to get out. He wants him to suffer and unfortunately, Liam is just collateral damage.

During the week of July 5, Wyatt is going to lash out at Justin over his family’s predicament.

Justin keeps saying he’s working on helping Bill and Liam. He is saying the same thing to Wyatt, that he has a legal strategy he’s working on. However, saying the words and actually proving it are two different things. Despite Justin’s assuring words, that’s not good enough for Wyatt. He is starting to wonder if Justin is doing anything at all for his father and brother.

The Bold And The Beautiful Spoilers – Demanding Legal Strategy Details

The Bold and the Beautiful spoilers for the week of July 5 reveal that Wyatt won’t just want to hear the same words being repeated. If Justin is working on a specific angle to help Bill and Liam, Wyatt wants to know what it is. He interrogates Justin about the details of this supposed legal angle. One thing that Justin is good at is covering. He will probably claim that he’s looking for witnesses or checking for traffic cameras in the area. When Wyatt listens to Justin’s explanation, will he even believe him?

Wyatt isn’t the only one that is getting suspicious of Justin. Bill is starting to wonder what Justin is doing to help him and Liam get out of their predicament. Things will spiral out of control and tempers will flare once Liam attends his sentencing hearing. The judge gives no leniency to Liam and in fact, seems to be making an example out of him. That doesn’t sound like Justin tried very hard. In fact, it sounds like Justin did everything to ensure the book would be thrown at Liam. He will probably be counting on a similarly harsh sentence for Bill. However, the truth will come out and Justin will have to pay the price when that happens.