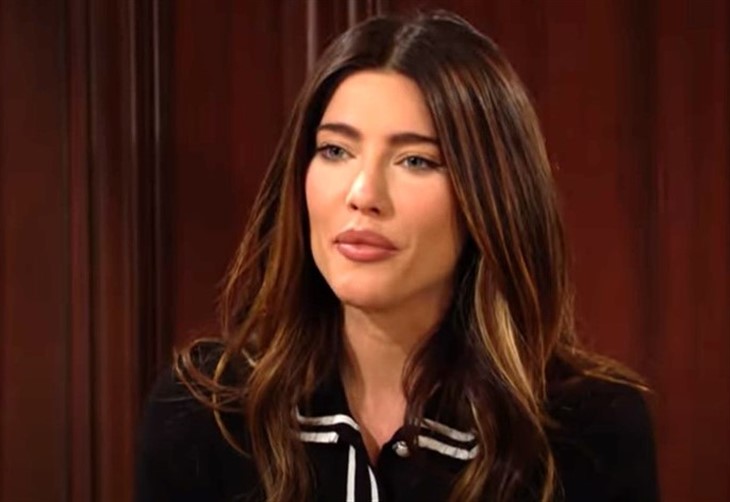 The Bold and the Beautiful (B&B) spoilers reveal that In Los Angeles after “Sinn” learns the paternity truth, their relationship will be better than ever. Steffy Forrester (Jacqueline MacInnes Wood) decides to make a bold move to prove her love to John “Finn” Finnegan (Tanner Novlan). Could she actually take down the “Steam” portrait?

The Bold And The Beautiful  – About That ‘Steam’ Portrait

B&B spoilers reveal that Steffy and Liam Spencer (Scott Clifton) have not been together for at least two years. However, she still has that gigantic “Steam” portrait hanging on her living room wall. It should have come down when the couple split up for the last time. At the very least, out of respect for Finn, it definitely should have been taken down when Steffy got involved in a new relationship. But it still hangs on the wall to this day.

Steffy makes all kinds of excuses why she keeps the portrait on the wall. Most of the time, she claims that it’s for her daughter, Kelly Spencer (Colette and Avalon Gray). But if that were the case, she could have moved it to her daughter’s bedroom. Kelly is never out in the living room, so why proudly display it for the world to see? Besides, Kelly already knows her parents aren’t together anymore, even at her young age. It makes absolutely no sense to keep a portrait of a divorced couple that’s the size of Mt. Everest.

The Bold And The Beautiful  – John Finnegan’s Wish

The Bold and the Beautiful spoilers reveal that Finn mentioned once that he knew the real reason why that “Steam” portrait was still on the wall. It’s because he is aware that Steffy and Liam have a complicated history and there are some feelings that linger. Finn said that he hoped that one day Steffy would get over Liam completely. Despite his statement, though, it must have hurt each time he walked into Steffy’s house and had to stare at that portrait.

The Bold And The Beautiful Spoilers: Zoe Fights For Her Manhttps://t.co/QbEwcO0c36

It is teased that during the week of March 15, Steffy will make a bold move to prove her love to Finn. Of course, it would be wonderful if “Sinn” got married, but something needs to happen first. That “Steam” portrait needs to come down. Perhaps that is what she is planning on doing? Let’s hope so because that portrait has been on the wall for two years too long.

What bold move do you think Steffy makes to prove her love to Finn? Is she finally going to take down the “Steam” portrait? We will have to keep watching the CBS soap to find out what happens next.