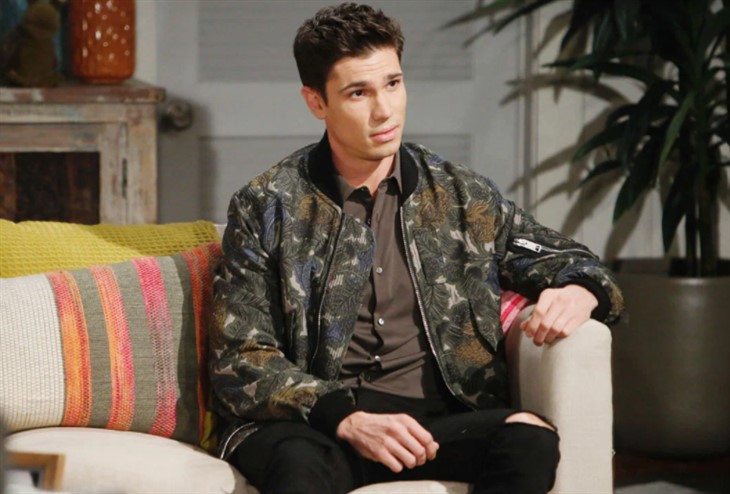 The Bold and the Beautiful (B&B) spoilers tease that in Los Angeles John Finnegan (Tanner Novlan) will arrive at the hospital’s laboratory while Thomas Forrester (Matthew Atkinson) is pressing for an answer. The middle of this conversation will be instantly interpreted by Finn as critical to the future of his life.

Buzz indicates that a dramatic confrontation happens by mid week and that Steffy Forrester (Jacqueline MacInnes Wood) will be pushed to the brink as a result. Finn will be positioned to beg her not to leave Los Angeles, California.

The Bold And The Beautiful Spoilers – Why Did Vincent Walker Rig The Results?

Vincent Walker (Joe LoCicero) fully believed that he was helping Thomas. If assumptions prove true, Vinny will be guilty of changing the paternity test results to make it look like Liam Spencer (Scott Clifton) is the father of Steffy’s baby.

As the audience can project, Finn and Thomas will forcefully pressure Vinny. They will also go wild if the digital records are accessed while Vinny is present. Their intent will be to hold him accountable.

B&B Spoilers – Dramatic Consequences All Around

Vinny told Thomas that he would lose his job for breaking patient confidentiality. He also initially refused to show Thomas the test results, which indicates that Finn will be confirmed as the dad.

However, Vinny knows that his new job would be over and that criminal charges could also be filed. So, he’ll be motivated to prevent both men from learning the truth in that moment or to try and escape if Finn uses his log in credentials to access the truth.

As that happens, Thomas will be playing the hero. This is part of an ongoing process where he’s rapidly restoring his family’s trust and gaining Hope Spencer’s (Annika Noelle) admiration for his self-repair efforts.

The Bold And The Beautiful Spoilers – Future Arrives Hard And Fast

As viewers know, Wood recently went out on maternity leave. So, Steffy’s on-screen time will have to be addressed in some believable fashion.

The Bold And The Beautiful (B&B) Spoilers: Zoe Blames Paris For Losing Carter – Will She Poach Zende? #bb #boldandbeautifulhttps://t.co/gtoEVovW74

It appears as though the conflict between the trio of Thomas, Vinny, and Finn will be tied to Steffy’s teased desire to leave town. This doesn’t necessarily mean that this character will do so, or imply the length of any time spent away from LA. But rapidly developing events should finally provide the answer that Thomas and the audience want.

The fatherhood question should be resolved, with fans knowing if Finn will be expecting along with Steffy. Thomas will have done right one more time. As for Vinny, his friendship with Atkinson’s character appears to be trashed.