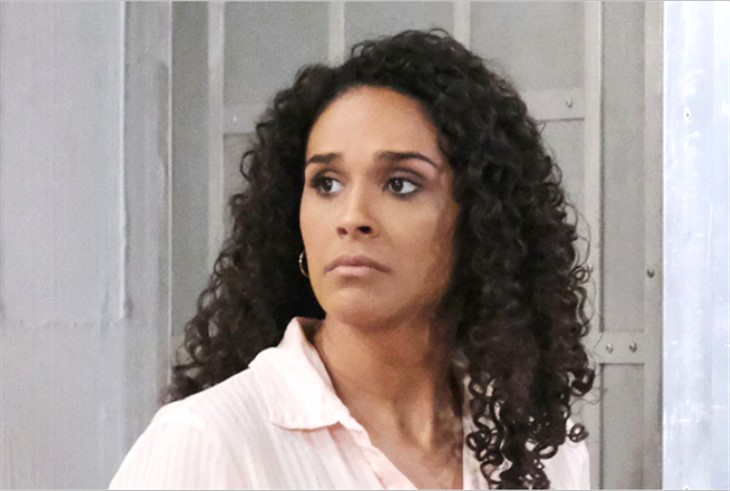 General Hospital spoilers show Jordan Ashford (Briana Nicole Henry) is a dedicated police commissioner. She wants to keep the peace in Port Charles. She has been dealing with local mob boss Cyrus Renault (Jeff Kober). Recently she has been crossing some lines that have put her relationship with husband Curtis Ashford (Donnell Turner) at risk. They are currently separated and may not be able to repair their relationship. If that is the case then Jordan may need to find a new love.

General Hospital recaps reveal Jordan and Marcus Taggert (Real Andrews) were at one time partners. They worked together on a case with two other agents to bring Cyrus to justice. Jordan and Taggert later found out that the two other agents were dead. They came to the conclusion that it was Cyrus who wanted to get back at them. Cyrus went after Taggert by kidnapping his daughter Trina Robinson (Sidney Makayla) and Cameron Webber (William Lipton). Taggert and Curtis went to save Trina and Cameron.

Taggert was hurt and later was declared dead. Curtis felt badly because he had been able to save Trina but not Taggert. However Taggert and Jordan had faked his death so that he could get away from Cyrus. Later Curtis found out that Jordan helped Taggert. Curtis was hurt that Jordan kept the truth from him. It is the main reason that Curtis and Jordan have separated. Jordan may turn to Taggert while she and Curtis are separated. She and Taggert have a close friendship that could turn into something more.

Jordan and Cyrus do not have a good relationship. Cyrus blames Jordan for being put into jail for years. Cyrus had Jordan’s son TJ Ashford (Tajh Bellow) kidnapped to get her to help him. Cyrus did let TJ go. Cyrus seems to have an interest in Jordan. He comes to her to get her to help him with different matters.

Recently he wanted her to help him find his missing mother Florence Grey (Annie Abbott). General Hospital spoilers tease Jordan does not like Cyrus but she has helped him before. Jordan is brokenhearted over Curtis. She may start to go into a dark place. Could that lead Jordan to have a relationship with Cyrus even though she does not like him?

Jordan and Martin Grey (Michael E. Knight) have not had much to do with each other. However they are connected by Cyrus. Martin is Cyrus brother. Martin and Cyrus do not have a good relationship. However they both love their mother. Martin is a lawyer. He wants to bring Cyrus to justice. Martin could get Jordan’s help with Cyrus. Could Jordan and Martin find something together if they try to stop Cyrus?

GH Spoilers – Jordan Ashford May Have To Move On

General Hospital’s Jordan may have to find a new love if she and Curtis cannot overcome the secret that she kept from Curtis. Could Jordan find a new life partner with Taggert who is her friend and former partner? Would Jordan turn to Cyrus even though she is works to uphold the law? Could she connect with Martin and find a new love? Tune into General Hospital to find out who Jordan might move on with.

Let us know what you think in the comments below, check back here for more General Hospital spoilers and GH rumors.