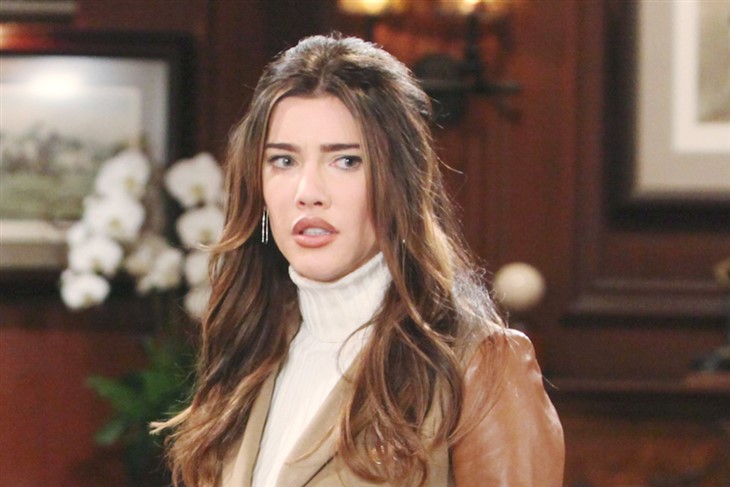 The Bold and the Beautiful (B&B) spoilers for Monday, July 19, 2021, reveal in Los Angeles Steffy’s apprehension about marrying a man she knows almost nothing about.

The Bold And The Beautiful Spoilers – Who Is Finn Anyway?

Finn (Tanner Novlan) is so anxious to put a ring on Steffy’s (Jacqueline MacInnes Wood) finger that he pulled out wedding bands sitting right there on the couch after he and Steffy said what they would say to one another during a marriage ceremony. However, when Steffy saw the rings, she began to have her doubts.

Sure, she just gave birth to Finn’s son in a kiddie pool in her living room in soaps’ first water birth where the mother looked more in ecstasy than in labor pain agony as Finn sat in the pool with her, but that doesn’t mean she wants to marry the man — yet.

What does she even know about him? She never even met his parents and never even calls him by his first name. She may love this man who is the father of her son, but she certainly doesn’t know enough about him to marry him. She wants to marry him, but she needs to know more about him first.

Carter (Lawrence Saint-Victor) is no longer engaged to Zoe (Kiara Barnes) and Quinn (Rena Sofer) was kicked right out the Forrester mansion and knows she will soon be divorced. So, what is stopping Carter and Quinn from being together? Apparently, nothing because the attraction was palpable when she showed up at his apartment and noticed her portrait there. The fact that he didn’t throw it out or burn it like Eric (John McCook) suggested means a lot to Quinn. One thing leads to another and on Monday, the pair fall into bed again.

Will they sneak around this time or enter into a relationship out in the open? How will Eric feel when he finds out his representation in his divorce is sleeping with his soon-to-be ex-wife again? Conflict of interest would be putting it mildly. Heck, even Ridge (Thorsten Kaye) forgave Carter and here we go again. Stay tuned to The Bold and the Beautiful weekdays to see how these stories play out.