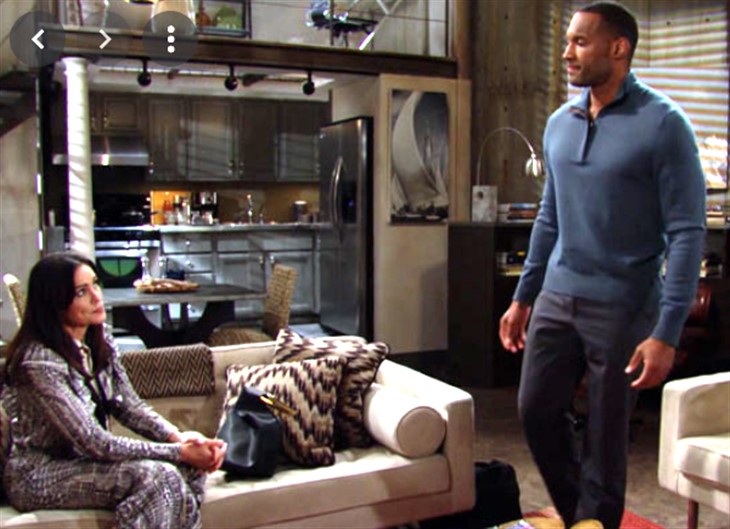 The Bold and the Beautiful (B&B) spoilers for July 15, 2021, reveal in Los Angeles Carter and Quinn having their first talk since Quinn’s portrait came down from Eric Forrester’s wall.

The Bold And The Beautiful Spoilers – A New Beginning For Quinn Forrester And Carter Walton?

Carter (Lawrence Saint-Victor) feels he should be grateful that Eric (John McCook) didn’t fire him, but he certainly didn’t let him off easy. Now he wants Carter to represent him in the divorce — a divorce that’s happening because Carter slept with Eric’s wife. Eric even handed him Quinn’s (Rena Sofer) portrait and told him to throw it in the trash if he wants to, but does he want to?

On Thursday, Carter and Quinn discuss Eric’s demands and wonder if they can even give their relationship a shot if Eric is sorta forgiving Carter. Maybe Eric is just testing Carter. Or maybe Carter will decide to be his own man and date whomever he wants. There are other jobs out there to be someone’s right-hand lawyer, right?

Of course, they may also feel so guilty about what they did to Eric that they will agree to stay away from one another from now on, but will they be able to do it? After all, they were quite attracted to one another, but will Quinn be devastated when she learns about her portrait?

And then there’s Eric who is still hurt and furious. Will Donna (Jennifer Gareis) be there to pick up the pieces because it sure seems like what she wants to do?

B&B Spoilers – Liam Spencer Has To Swallow His Pride

Bill (Don Diamont) might be in need of a right-hand lawyer again soon. Eric might have not fired Carter, but Dollar Bill is much angrier at Justin (Aaron D. Spears). He can’t believe Justin would have kidnapped Thomas and kept him and Liam (Scott Clifton) in jail. Despite Justin begging for his forgiveness, Bill is not ready to give it.

On Thursday, Bill lays into Justin some more and it looks like he is going to be out for revenge. Will Liam be able to talk him down? Will Justin go more rogue? And will Thomas press charges since Justin did assault him? Stay tuned to The Bold and the Beautiful weekdays to see how this story plays out.