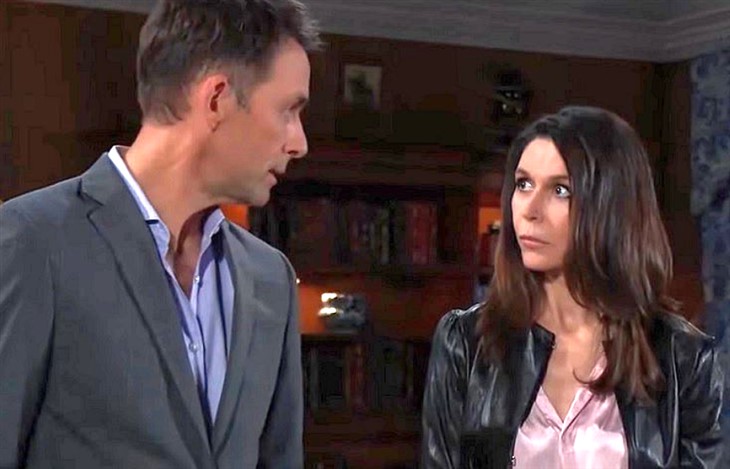 It feels like Ryan’s Hope is coming to General Hospital as Carly (Laura Wright) and Jason (Steve Burton) deal with the Novaks in Port Charles and Anna (Finola Hughes) and Valentin (James Patrick Stuart) visit Ryan’s Bar in New York City. Plus, Delia Ryan (Ilene Kristen) is Ava’s (Maura West) mother. But at Ryan’s Bar, Anna wonders aloud if they will ever find what happened to Peter (Wes Ramsey) when suddenly the helicopter pilot who was supposed to pick up Peter that night shows up.

Valentin immediately pounces on him — literally — and demands to know where Peter is. He tells him that he was supposed to get Peter on the GH roof but he never showed up, which leaves Anna and Valentin more confused than ever, but at least they know more now than they did before.

Back in Port Charles, Brook Lynn (Amanda Setton) finds a way for Maxie (Kirsten Storms) to see Bailey Louise when she brings her to the hospital, but then Austin (Roger Howarth) sees them and the two women freak out that he will somehow figure out their secret.

Just when Nina (Cynthia Watros) is getting more attached to Wiley and feeling moved by Michael (Chad Duell) and Willow’s (Katelyn MacMullen) efforts for him to know her, she has to deal with the fact that she is hiding Michael’s father on the Pennsylvania side of the river.

Sonny (Maurice Benard) informs Nina that Lenny (Rif Hutton) is dying and Nina is torn between staying in Port Charles and bonding with Wiley or returning to Nixon Falls and being a support for Phyllis (Joyce Guy). Of course, she wants to also see “Mike” and he wants to see her, but he is also starting to have flashes of memory so how long can Nina go on like this?

Trina (Sydney Mikayla) is fascinated to learn that Josslyn (Eden McCoy) and Cameron (William Lipton) kissed and want to try to see if a romantic relationship will work. She also informs her best friend about the new boy she met named Victor. Will she introduce them and will Spencer (Nicholas Chavez) even allow that to happen? Stay tuned to General Hospital weekdays to see how these stories play out.