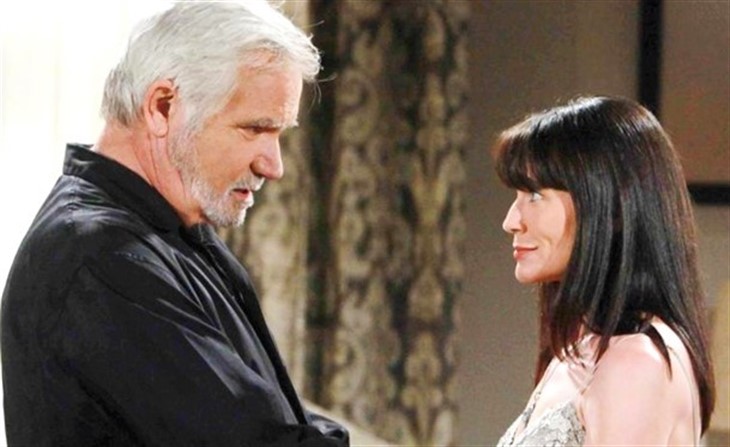 The Bold and the Beautiful (B&B) spoilers document that Eric Forrester (John McCook) reached the only conclusion he could. Quinn Fuller Forrester (Rena Sofer) had to go. Now, he’s begun the process of scrubbing her from his life.

As readers of this site know, the removal of her portrait represents a watershed moment on B&B. It hung above the mantel in the Forrester mansion’s living room, but never replaced Stephanie Forrester’s (Susan Flannery) iconic image.

Team Brooke Logan Forrester (Katherine Kelly Lang) thought Quinn’s likeness was hideous and a form of blasphemy, as Sofer’s character was never recognized as the current matriarch of the family. Others, in a very small contingent, believed that Quinn added to Eric’s life (until she didn’t).

The fullness of Quinn’s name represented a rather incredible accomplishment. Transforming herself from a casino server on the strip in Las Vegas, Nevada, to Eric’s wife was nothing short of remarkable.

Quinn transfixed Eric, coming into his life at the right moment in daytime. He genuinely fell in love with her and felt that she brought a unique element to his world that kept him invigorated.

There wasn’t a loud group of viewers who supported Quinn being with Eric. Of course, there was a quiet gathering either. So, if the fans didn’t support Queric then why was it allowed to persist since 2016?

Sofer is a great actor. Her interplay with Lang, who is an iconic part of this show, with her run dating back to B&B’s inaugural year (1987), was outstanding. That’s one major reason.

It’s fair to suggest that TPTB felt this mismatched couple, with characters from two different sides of the tracks and their personalities being very different, created an odd couple dynamic. The tension of having a disliked lady being Eric’s wife did play well in various storylines, as the characters who opposed her also couldn’t defeat Quinn.

Quinn defeated herself in the end, which was sweet justice for all Team Brooke members.

The Bold And The Beautiful Spoilers – Carter Walton Stunner Storyline

Having Carter Walton (Lawrence Saint-Victor) paired with Quinn worked because of the unlikely nature of that happening. Quinn never made overtures in the past and Carter was a loyal to Eric and the Forrester family.

Having Eric remove Quinn’s portrait from the wall and hand it to Carter is classic soap. Whether that framed image eventually hangs in Carter’s condominium can’t be laughed off. While that might not actually happen, Quarter as a couple is surely an intriguing and now realistic option.

The changes that Carter is facing have to impact his position at Forrester Creations. As for Quinn, she’s out of Eric’s life, family, and the company. So, Carter projects as her go-to guy once again.