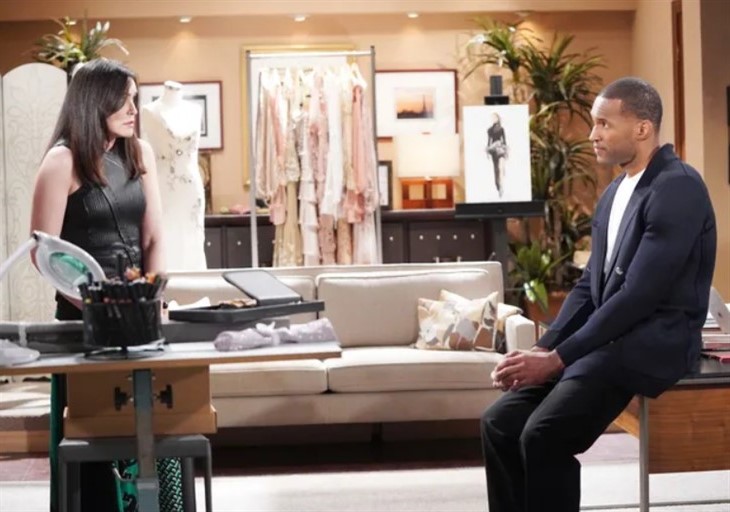 The Bold and the Beautiful spoilers for Monday, July 26, 2021, reveal in Los Angeles a possible commitment between Carter and Quinn.

They’re definitely a surprise couple for the audience and seem to be a surprise for the character as well. Quinn (Rena Sofer) thought the sun rose and set on Eric Forrester (John McCook). Just the idea of him finding out she had been unfaithful sent her into such a complete panic that she insisted they renew their wedding vows as soon as possible.

Then, Brooke (Katherine Kelly Lang) interrupted that vow renewal with the news that Quinn slept with Carter (Lawrence Saint-Victor) and that was the end of Quinn’s marriage. Life has been looking brighter ever since. Carter seems to love having this covert affair with her and not only did he rescue her portrait, he also rescued her jewelry line. What could be better?

Well, another roll in the hay, of course. Carter and Quinn just can’t keep their hands off one another and this looks like more than just a secret relationship. Will they just tell the Forresters and Wyatt (Darin Brooks) that they are two grown adults who can do whatever they want?

B&B Spoilers  – Paris Buckingham Has Some Explaining To Do

Paris’s (Diamond White) life is now taking a turn she never expected. Show up to a business meeting at a beach house with tacos and a standard lullaby and the next thing you know, you’re living in that beach house taking care of babies.

Paris is forced to explain her new surprising living situation to Zende (Delon De Metz) on Monday. What will he think about her moving in with Steffy (Jacqueline MacInnes Wood), Finn, and their two young children? Will Zende resent her making such a big life decision without her. Is it even his business? It’s not like he and Paris are committed to one another and Paris has her own life to live. A luxury home on the edge of an ocean cliff is calling. It also happens to have a handsome doctor we know virtually nothing about as one of its residents… Stay tuned to The Bold and the Beautiful weekdays to see how these stories play out.