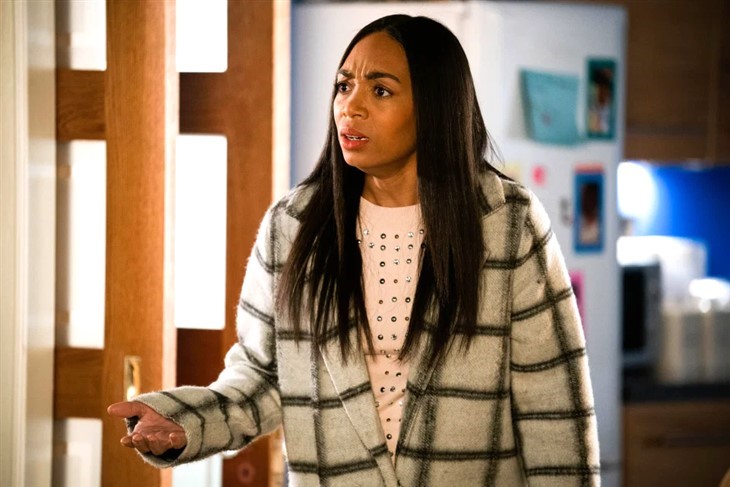 EastEnders spoilers and updates tease that Zaraah Abrahams, who portrays Chelsea Fox on the soap, will be the one to expose Gray Atkin’s (Davood Ghadami) wrongdoings. Is she the one who’ll bring Gray down?

Fans know that Chelsea is dating Gray. She doesn’t have any clue about his dark history. He killed his first wife Chantelle, Tina Carter (Luisa Bradshaw-White), and Kush Kazemi (Davood Ghadami). Will she be Gray’s next victim as she discovers the earring that Tina wore the night she was killed? How will Gray react when he realizes that the earring belonged to Tina?

In an interview with Inside Soap, Abrahams said she’d love it if Chelsea uncovers and exposes Gray’s dark secret “as long as there are no repercussions for her.”

The actress described her character as “nosy” and “quite a selfish person.” She’ll eventually do some digging and it’ll definitely be “explosive” if she finds out that Gray murdered three people.

Even if that doesn’t happen, Chelsea may run the risk of experiencing Gray’s wrath as she gets him involved in her criminal activities when she took him to see a van that contains stolen dresses.

Chelsea may have had the wrong impression about Gary. “Chelsea thinks she’s invincible! She thinks that going out with a lawyer means that nothing can happen to her.” How will Gray react?

It seems like Gray has no plans of losing Chelsea so he comes up with a plan that will make sure she stays in his life for good. Gray asks Chelsea to take the kids shopping. Karen thinks Chelsea’s not putting in a lot of effort with Gray’s kids. So, this could be a perfect time to bond with the kids.

Unfortunately, Chelsea neglects the kids at the market so Keegan Baker (Zack Morries) and Whitney Dean (Shona McGarty) try to help out. Whitney fixes Mia’s dress for free and the latter show’s it off, making Karen rethink her opinion about Chelsea.

It seems like Chelsea isn’t prepared to look after Gray’s kids while he’s working. How will he react if he finds out that she doesn’t want to spend time with Mack and Mia? Will he break it off with her, thus saving Chelsea from becoming Gray’s fourth kill?