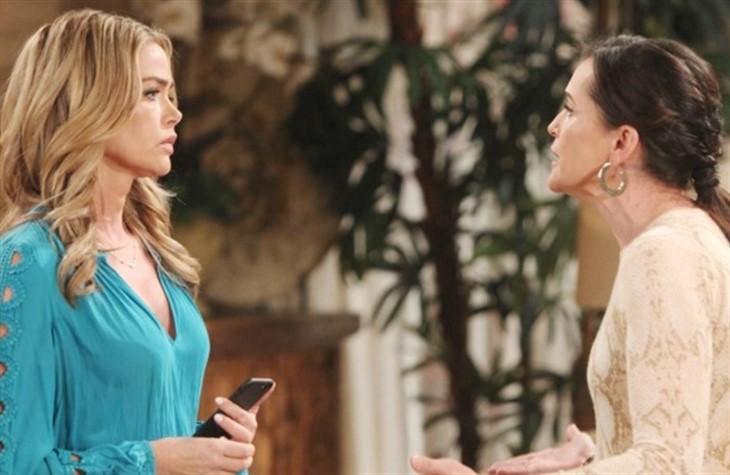 The Bold and the Beautiful (B&B) spoilers tease that the emotional distance between Quinn Forrester (Rena Sofer) and Eric Forrester (John McCook) will spell trouble. As Eric and Quinn struggle to connect, a new man will enter the picture. This will lead to an inner battle for Quinn as she tries to do the right thing – perhaps while battling the temptation to cheat.

Of course, B&B fans know Quinn and Shauna Fulton (Denise Richard) recently had an important conversation about their friendship. Shauna insisted she only stayed away for a while to give Quinn and Eric some space to focus on their marriage.

Quinn and Shauna established that they’re practically like family – and that’s especially true now that their children are getting married. Thanks to Wyatt Spencer (Darin Brooks) and Flo Logan’s (Katrina Bowden) decision to tie the knot, their moms definitely have a reason to celebrate together.

However, spring preview info points to tension for Shauna and Quinn. The Bold and the Beautiful spoilers say this friendship will be put to a pretty extreme test. What could be the reason for Quinn and Shauna’s looming issues? There’ll apparently be something these two disagree on, so that could involve this new man of Quinn’s and the potential for her to stray from Eric’s bed.

Shauna may feel obligated to step up and stop Quinn from making a horrible mistake. She’ll know there may be no coming back from another epic blunder, particularly if that blunder involves infidelity.

Shauna might warn Quinn not to throw away her marriage over fleeting attraction. She may work to stop Quinn from surrendering to temptation and becoming her own worst enemy.

If Quinn feels like Shauna is overstepping – or if Shauna tries to make a move on Eric as a result of all this – it’s easy to see how tension could become part of the equation. Quinn may expect Shauna to be her bestie no matter what, but there could be problems if her behavior threatens to hurt Eric.

Shauna may call Quinn out for cheating or at least considering the idea! This could spark a war before Wyatt and Flo’s wedding, so they could certainly get dragged into the drama down the road, too.