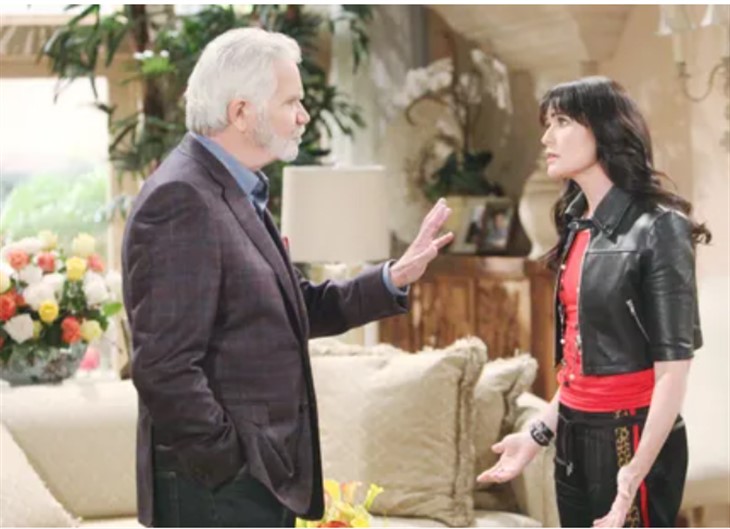 Viewers of The Bold and The Beautiful will recall the problems Eric and Quinn Forrester (Rena Sofer) had over the past year or so. Eric had tried to get Quinn to change her devious and manipulative ways, but it would seem that a leopard cannot change her spots! People cannot and do not change unless they want to change, Thomas Forrester (Matthew Atkinson) being a great example.

The Bold and The Beautiful fans will recall that the straw that broke the camel’s back was when Quinn colluded with Shauna Fulton (Denise Richards) to break up Ridge and Brooke Logan Forrester (Katherine Kelly Lang) and basically scam a very drunken Ridge into a Las Vegas wedding to Shauna! Ridge and Shauna’s brief “marriage”, under false pretenses anyway, was never consummated and when Quinn wanted to set up a vow renewal in front of family and friends, Shauna couldn’t go through with it.

She was the one who told Ridge and Eric of the wrong she did and how it was herself and Quinn who texted Carter Walton (Lawrence Saint-John) from Ridge’s phone to file the divorce papers from Brooke. Quinn had also sent a video that Shauna had taken through the window of Hope Logan Spencer’s (Annika Noelle) cabin of Brooke and Bill Spencer (Don Diamont) making out to a digital photo frame set up at Ridge and Brooke’s reconciliation party, which broke up Ridge and Brooke and Bill and Katie Logan (Heather Tom).

The Bold And The Beautiful Spoilers – Eric And Quinn Forrester Reconciled, But Eric Feels A Disconnect

Viewers of The Bold and The Beautiful will recall that Eric recently forgave Quinn and allowed her to move back in, and Shauna was a big part of that. Shauna’s honesty had impressed Eric and she stayed there in the guest house on the property for several months.

But since Quinn has moved back in on The Bold and the Beautiful and Eric reconciled with her, things are not the same. Eric feels a disconnect from Quinn since she moved back in and he talks about it with Ridge. Eric still is having a very hard time trusting Quinn after all the times she has lied to him, and schemed and manipulated. He has forgiven her, but it’s like forgiveness with a small f on it!

The Bold And The Beautiful (B https://t.co/6FTh072g4M #BB #BoldandTheBeautiful #Bold

Eric is very disconcerted that he no longer feels comfortable with Quinn and he doesn’t know how to get that back. Viewers of The Bold and The Beautiful will agree that Quinn is not over her scheming, lying and manipulations – although helping Zoe Buckingham (Kiara Barnes) spike her sister’s smoothie with Eric’s herbal stomach remedy is nowhere near the level of what Quinn is capable of! Still, it sounds like Eric’s marriage is falling apart because it is dying at the roots. Eric has forgiven much, but Quinn has not yet proved herself worthy of his love!