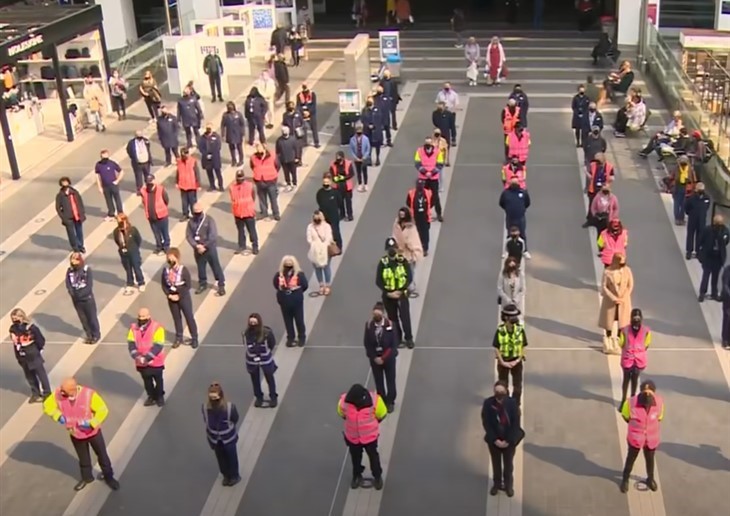 British royal family news reveals that despite being told to stay away, thousands of mourners lined the streets of Windsor to honor Prince Philip on the day of his memorial service.

Buckingham Palace asked the public to remain at home and watch the service on tv due to Covid rules. The police were said to have formed a “ring of steel” around the commemoration as Windsor Castle was the scene of tremendous of pomp and circumstance today. Queen Elizabeth laid her beloved husband to rest after 73 years of marriage and it appeared as if the nation mourned with her.

Security was very visible and on high alert, with police snipers on roof tops. Armed police and security officers were in force with patrols taking place in parks and the surrounding area while a police helicopter hovered overhead.

The Duke of Edinburgh’s casket was covered in his personal standard and carried his sword, naval cap and a wreath of flowers and his casket was carried on a Land Rover he helped to design.

The Queen arrived to the national anthem and her car stopped next to her husband’s coffin, where she paused for a moment of reflection. At the same time cannons fired and bells rang out in remembrance as hundreds of troops stood nearby.

Her car, with a lady in waiting inside, then made its way to St. George’s Chapel. She sat alone at the front of the church and her head was bowed throughout much of the service.

Royal Family News – There Was Tight Security At Philip’s Funeral

Thames Valley Police made sure to enact plenty of visible and covert security measures including automated number plate checks, CCTV and barriers to prevent vehicle attacks.

One officer told MailOnline they were expecting throngs of people to arrive at other Royal palaces despite the stay away order.

He added, “The funeral may be in Windsor but we’re expecting a lot of people to turn up at Buckingham Palace, as they have been through the week. The sun is out and people have been very moved by Philip’s death. There’s lots of media here and we have to make sure things run smoothly because the eyes of the world are on us.”