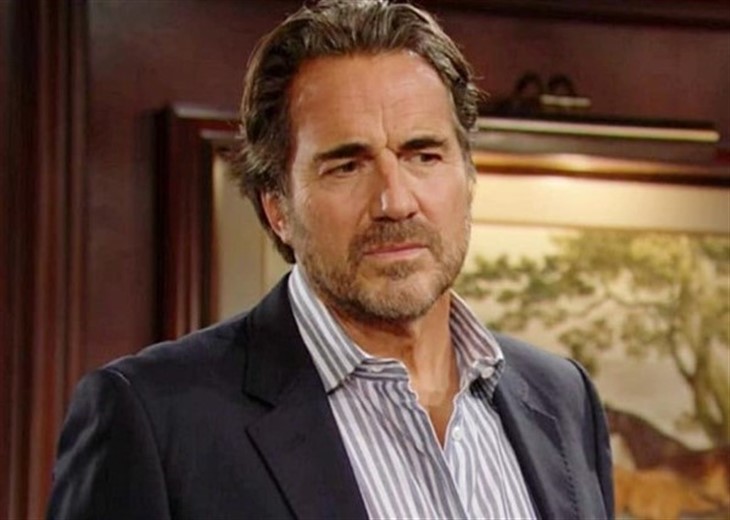 The Bold and the Beautiful (B&B) spoilers for Monday, December 6, 2021, reveal Ridge sticking his nose where he doesn’t belong once again expecting people to do what he says.

It was a tense week for Brooke (Katherine Kelly Lang) and Ridge Forrester (Thorsten Kaye) as they argued over Deacon Sharpe (Sean Kanan) and Ridge’s disdain for the man Brooke had a child with all those years ago. He doesn’t want him back in their lives and can’t imagine what Brooke is softening towards him.

Furthermore, he doesn’t want Deacon in Hope Logan’s (Annika Noelle) life either and tells her just as much while issuing an ultimatum on Monday. Something tells us Hope won’t go for this ultimatum as she made it clear weeks ago that Ridge is not her father no matter how many times he’s been married to her mother.

Ridge seems to be at a crossroads as he feels he has no control over these two women in his life, so he commiserates with his own two children, Steffy (Jacqueline MacInnes Wood) and Thomas Forrester (Matthew Atkinson), who sympathize with their father, but also offer some words of wisdom.

Meanwhile, Deacon remains more determined than ever to be a part of Hope’s life and stop being cast as an outsider. He has a plan for how he is going to make this happen and when he shares it with Sheila Carter (Kimberlin Brown), all she can do is laugh.

Is it not nutty and devious enough for Sheila, who always has to have elaborate, dangerous, and manipulative plans thinking that is the only way she will ever get what she wants? If Deacon wants to try staying clean and on the up and up, Sheila is not going to go for that and Deacon may need to find a new friend.

Perhaps Brooke is available as she is about to have some stuff competition for Ridge sooner rather than later as an old fan-fave is about to return to town in a big way. Stay tuned to The Bold and the Beautiful weekdays to see how this story plays out.

Savannah Chrisley Fans Tell Her Their Hopes & Dreams For 2022