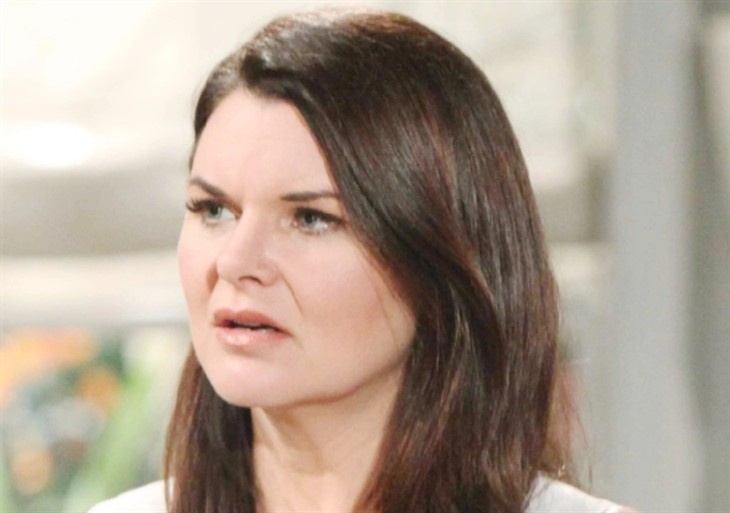 The Bold and the Beautiful (B&B) spoilers reveal that in Los Angeles Paris Buckingham (Diamond White) confided in Katie Logan (Heather Tom) . She discussed  newest secret. It is confirmed that Zoe’s job will be on the line and Ridge Forrester (Thorsten Kaye) will make a decision. Could Katie end up telling Ridge what she found out? It could make his blood boil!

The Bold And The Beautiful Spoilers – Zoe Buckingham’s Newest Secret

B&B spoilers reveal that Zoe has tried to get Paris to leave L.A. several times. She even resorted to having resignation papers typed up and all Paris had to do was sign them. However, Zoe ended up discovering that she couldn’t bully or manipulate her little sister anymore. Paris refused to quit her new job and ripped up the documents right in front of Zoe.

After the forced resignation scheme failed, Zoe didn’t tell anyone what she did. The model likes to put on a facade for everyone and only reveal her true colors to Paris. However, people are starting to see the real Zoe. Then, Paris and Katie had a conversation and that is when the resignation papers were brought up. Katie was stunned and horrified at what extremes Zoe was going to in order to get Paris to leave.

The Bold And The Beautiful Spoilers – Ridge Forrester Contemplates Termination

The Bold and the Beautiful spoilers reveal that head writer Bradley Bell told Soap Opera Digest that Zoe’s job would be in danger because of her actions. We know that Zoe makes an attempt to make things right with her sister, but one week later, she goes back to plotting revenge. So something happens in between that time. With Katie learning about Zoe’s resignation scheme, could she tell Ridge about it? He thinks that Paris is the best thing ever and is disgusted by Zoe already. This could send him over the edge and it might be the reason why Zoe learns her career could be over.

No matter how bad Zoe behaves, Paris always seems to protect her. Carter Walton (Lawrence Saint-Victor) asked Paris if Zoe really loved him and if he could trust what she says. She could have told him that she’s pulled these schemes before and that she can’t be trusted with his heart. She could have said that she didn’t know how Zoe really felt. Instead, she looked at Zoe’s pleading eyes and defended her. She said that Zoe really loved him, but made it clear that trust was between them.

The Bold And The Beautiful (B&B) Spoilers: Zoe Slapped With Reality Check, Kiara Barnes On ‘The Truth Hurts’ https://t.co/m2NS5ygDEJ pic.twitter.com/rqljm0XIFM

So, by the same logic and looking at Paris’ heart, it is reasonable to assume that she will once again try to protect Zoe. When Ridge considers terminating the model from Forrester Creations, could Paris come to the rescue? Will the devious schemer end up keeping her job because of her sister? Maybe she thinks that it will somehow repair their strained relationship. However, things will only get worse.