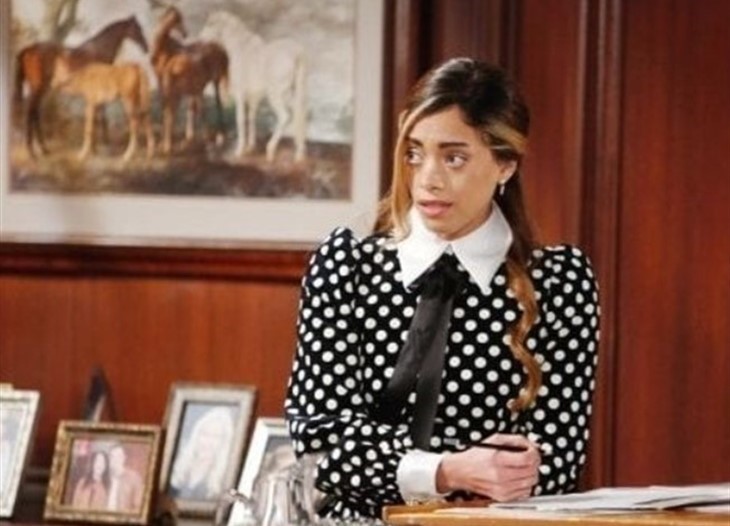 The Bold and the Beautiful spoilers reveal that Zoe Buckingham (Kiara Barnes) blames everyone else for her actions. It seems that the model will finally be slapped hard with a reality check. She finally accepts responsibility for destroying her own life and tries to make amends with Paris Buckingham (Diamond White). The actress discussed how “the truth hurts.”

B&B spoilers reveal that Zoe has a hard time accepting responsibility for her own actions. No matter what happens to her, it’s always someone else’s fault. Most of the time, Zoe’s scapegoat is her little sister, Paris. Even though Paris had nothing to do with Carter Walton (Lawrence Saint-Victor) breaking up with her, Zoe can’t understand that.

In the new issue of Soap Opera Digest, it is teased that Zoe is going to start realizing that everything negative that has happened in the past few months is nobody else’s fault. She will begin accepting responsibility for her actions. This includes flirting with Zende Forrester (Delon de Metz), Ridge Forrester (Thorsten Kaye) catching her seduction attempt, and Carter dumping her.

It seems that Zoe wants to pile all the blame on Paris and make her suffer. Then when Zoe needs her sister, she gives the doe-eyed begging look. Last week, Carter asked Paris if Zoe really loved him. It took her a while to answer, but Zoe had that desperate pleading look on her face. Paris ended up saying Zoe really loved him, but wouldn’t go any further than that.

The Bold And The Beautiful Spoilers – Making Amends With Paris Buckingham

The Bold and the Beautiful spoilers reveal that Zoe will realize that she needs to make amends. She tries to fix her relationship with Paris. However, a lot of hurtful things have been spoken and done. So, it is unlikely that Paris will trust her sister like she did before but they could have an improved relationship after some time passes. Paris has gone from wanting to be around her sister 24/7 to keeping their lives completely separate.

The actress discussed Zoe and admitting responsibility with SOD. She explained the completely 180 with Zoe.

The Bold And The Beautiful (B&B) Spoilers: Zoe’s New Plan To Win Carter Back – Will He Be Duped Again?https://t.co/ShGkYwLMgg

In addition to repairing her relationship with Paris, expect Zoe to try and fix things with Carter. She will pull out all the stops and set up a romantic dinner for him. However, will a meal and some candles really make her betrayal disappear? We will have to find out what happens with Carter and Zoe.