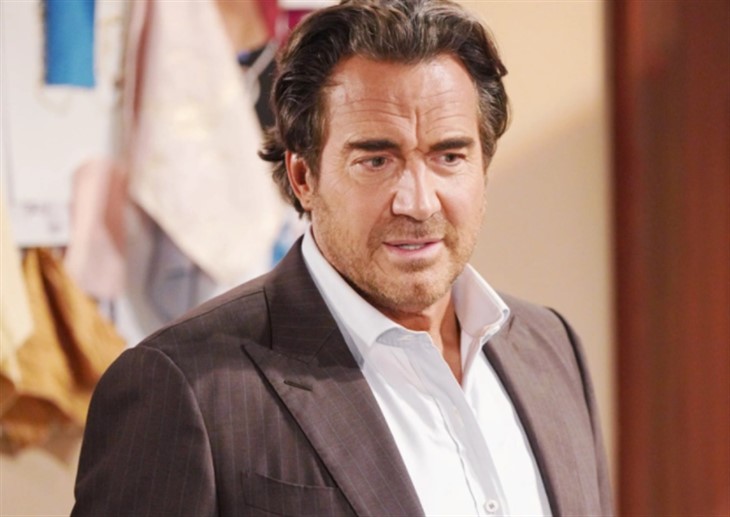 The Bold and the Beautiful (B&B) spoilers reveal that detectives are still investigating Vinny Walker’s (Joe LoCicero). They end up paying a visit to Ridge Forrester (Thorsten Kaye). Deputy Chief Bradley Baker (Dan Martin) informs Ridge that Thomas Forrester (Matthew Atkinson) is in trouble. He hasn’t done anything yet, but detectives can’t ignore the red flags.

The Bold And The Beautiful Spoilers – Warning Ridge Forrester

B&B spoilers reveal that this week, Deputy Chief Brady stops by to see Ridge. This isn’t necessarily unexpected. After all, detectives are still trying to solve Vinny’s murder. Everyone connected to the drug dealer will be questioned, especially if they had a motive. Several people were affected by Vinny’s paternity test result switch. Of course, the main people impacted were Liam Spencer (Scott Clifton), Hope Logan Spencer (Annika Noelle), John “Finn” Finnegan (Tanner Novlan), and Steffy Forrester (Jacqueline MacInnes Wood). However, their loved ones were also affected. So, Ridge was probably expecting Baker to come to ask him some questions.

However, Ridge is thrown when Baker does not state that he’s there to ask about Vinny. He is there to warn him that there is trouble with Thomas.

At first, Ridge thinks that something has happened to Thomas. However, he soon realizes that Thomas isn’t hurt and isn’t actually in any trouble. Baker thinks Thomas could soon find himself on the other side of the law, though. Ridge immediately gets defensive and sticks up for Thomas. That is his natural instinct when it comes to Thomas. However, Ridge needs to pay attention. If Baker is worried that Thomas is going to snap, then Ridge should be proactive to prevent that from happening.

The Bold and the Beautiful spoilers reveal that Baker was first concerned about Thomas during questioning. Even though he had to ask if he killed Vinny, his concern isn’t about a current case. He is worried about what is going to happen if someone doesn’t step in. He is seeing a lot of red flags with Thomas. The guy is also in deep grief over losing his best friend. On top of all of that, Thomas feels guilty about cutting off Vinny right before he died. All of these put together, along with Thomas’ obsessive nature, is a very dangerous combo.

Being hyperfocused and obsessive is part of Thomas’s personality. He is always obsessed with something or someone. Most people use that energy and throw it into their careers, hobbies, sports, or even family. Thomas is over his fixation with Hope and so far, we haven’t seen him obsess over anything new. That is, until Vinny’s murder investigation. As each day passes, we are seeing Thomas seethe and threaten to get revenge. He even snapped at Hope, which isn’t like him at all.

If the police take too long before arresting a suspect, Thomas might take matters into his own hands. He will soon discover that Liam began acting strangely after the murder. Plus, with him spiraling and keeping secrets, Hope will confide in Thomas. This would lead to him connecting the dots but would he really commit murder?