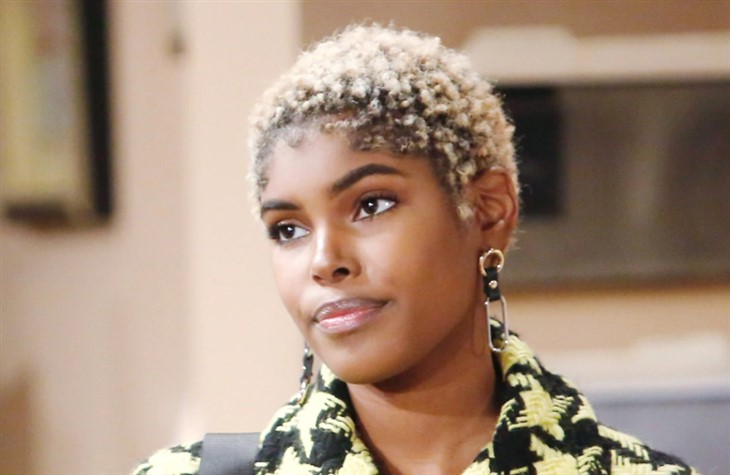 The Bold and the Beautiful (B&B) spoilers document that Paris Buckingham’s (Diamond White) recent gastrointestinal event provided the type of light-hearted moments that are needed in daytime. More are called for in order to counterbalance the tension between Paris and Zoe Buckingham (Kiara Barnes), along with the other serious storylines on this soap.

Solid kudos to the writing staff and the four actors who made these scenes memorable. Zoe sought to play a practical joke on her younger sister, who continues to annoy her because Paris looks many times more mature in any comparative sense, although Barnes’ alter ego can’t admit that.

Quinn Fuller Forrester (Rena Sofer) is a trouble-maker and delights in being so. She seems to have learned little from her latest go-round with Eric Forrester (John McCook).

All that happened between Shauna Fulton (Denise Richards) and Ridge Forrester (Thorsten Kaye) can not be blamed on Quinn. But Sofer’s character definitely wanted to separate Brooke Logan Forrester (Katherine Kelly Lang) from Ridge by using Shauna’s unique appeal. While that effort initially worked, Ridge returned to Brooke in the end, as he always has after past breakup periods.

So, devoted fans weren’t surprised to see Quinn encourage Zoe to embarrass Paris. Neither lady could stop herself from targeting Paris’ stomach, which was affected by the health food concoction Quinn allowed Zoe to slip into her sister’s drink.

The perplexed look on Zoe’s face said it all. She couldn’t believe that Zende Forrester Dominguez (Delon de Metz) shrugged off what happened.

Paris was worried that Zende would be mortified. She’s just getting to know the man who was Zoe’s first-choice, with Carter Walton (Lawrence Saint-Victor) being her backup man.

Like Paris, Zende isn’t shallow. He has a sense of confidence, but isn’t arrogant. Zende and Paris also aren’t petty and have a sense of shame, which Zoe swats down as undesirable in her me-first world.

The Bold And The Beautiful Spoilers: Thomas’ Guilt And Regret, Blames Himself For Vinny’s Deathhttps://t.co/qts5fjRqNM

The Bold And The Beautiful Spoilers – Paris Buckingham Reaches End Of The Road?

Viewers have to wonder how Paris will react when she learns that Zoe sabotaged Zende’s thoughtful date plan? His heartfelt actions included turning the Forrester mansion’s living room into a scene from Paris, France, as a tribute to the first name that White’s character holds.

By her actions Zoe appears to confirm that she’s still interested in Zende or that she just can’t accept Paris’ romantic advancement or both. The coming reveal will surely make Paris angry and likely also demonstrate that Zoe’s self-absorbed meanness cuts deep.

Zoe seems to be following her father’s (Reese Buckingham, Wayne Brady) skewed view of life. That comparison is symptomatic of a psychological problem Zoe must recognize before she can hope to stabilize herself and become a better person.