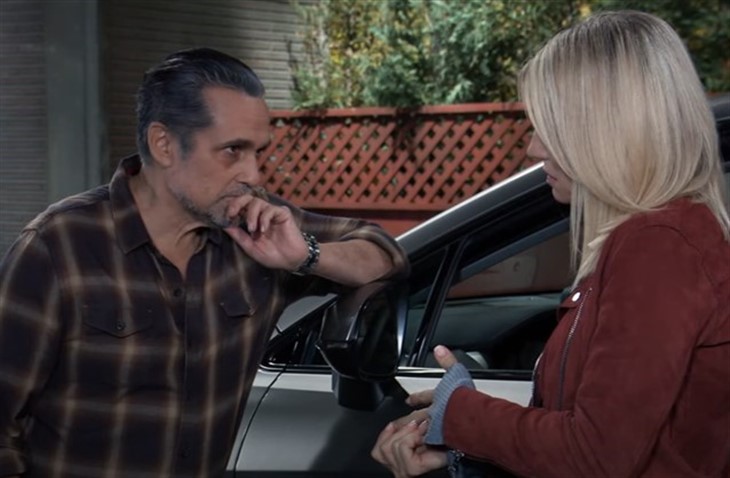 General Hospital (GH) spoilers reveal Nina coming out of her Nixon Falls deceit with the one thing she’s wanted more than anything in this world.

Nina (Cynthia Watros) might be tricking Sonny (Maurice Benard) into believing they just met because she couldn’t get a word in edgewise with Carly (Laura Wright) when she tried telling her that Sonny was alive.

She also thought for a bit that it would be fun to get back at Carly for keeping Nelle’s identity from her. By the time she thought better of it, she was in too deep. She didn’t know how to tell the truth and she actually likes Mike as a person better than she liked Sonny as a person.

And now Nina finds herself falling for Sonny and his dimples and is getting in deeper than ever as Sonny finds himself falling for her. As the pair try to bring down Elijah, they grow a little too close and fall into bed with one another. Soon after, Josslyn tries Trina’s leftover spaghetti sauce and realizes Sonny’s alive.

After a massive fallout, Carly condemns Nina for life, Sonny is torn because he is told he is this mobster but still has feelings for Nina, and Nina suddenly learns she’s pregnant. She was told she couldn’t have children, so the ideal man to impregnate one is a man who gets women pregnant essentially by sneezing on them. Sonny is just that good.

Of course, Nina wants to keep her baby, so she can join her fake daughter Sasha (Sofia Mattsson) for childbirth classes and how to keep a baby daddy a secret. While so much of this is completely soap opera cliche, it also makes for a story you can’t turn off.

Just imagine Carly’s ranting and raving when she does learn the truth. And imagine her absolute devastation when Sonny doesn’t remember a thing about their life together but also doesn’t understand why he needs to stay away from Nina. He may be angry because she lied to him, but it doesn’t negate his feelings. Stay turned to General Hospital weekdays to see how this story plays out.