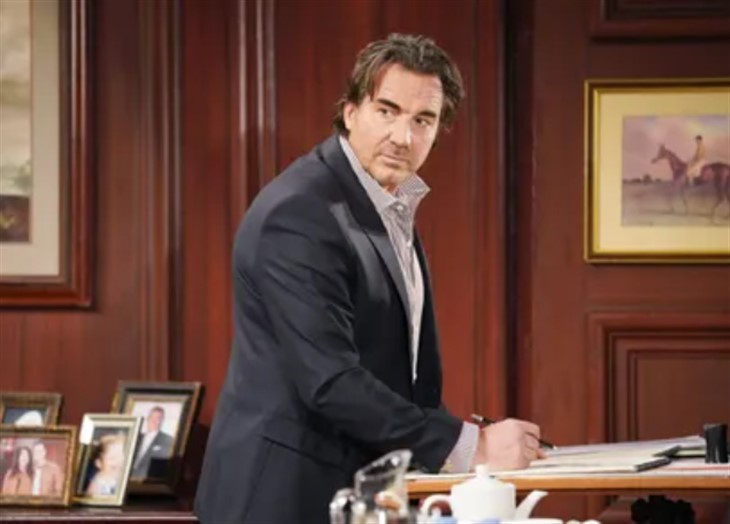 Viewers of The Bold and The Beautiful will recall that Thomas, along with Dr. John “Finn” Finnegan (Tanner Novlan) got into a fight in the lab at the hospital where Finn and Vinny work, over Vinny’s throwing the results of the paternity test in Liam Spencer’s (Scott Clifton) favor. He has already questioned Liam and now he has to question Thomas since he was involved in the fight in the lab.

Finn’s not back yet from his trip with Steffy Forrester (Jacqueline Macinnes Wood) and Kelly Spencer (Avalon and Colette Gray) on B&B. But Baker must eliminate persons of interest as well as find persons of interest before he can make a case for murder and make an arrest. Baker shows up at Forrester Creations the second time, to formally interrogate Thomas.

The Bold and the Beautiful spoilers show Ridge Forrester is there when Baker buttonholes Thomas and starts acting like he’s a suspect in Vinny’s murder! Ridge doesn’t like one bit what Baker is insinuating about his son and he lets Baker know it in no uncertain terms!

Ridge and Taylor Hayes (Hunter Tylo) lived next door to Vinny’s parents and both Steffy and Thomas were playmates with Vinny when they were little. Viewers of The Bold and The Beautiful will recall that Vinny and Thomas were best buddies most of their lives, and Ridge tells Baker how ridiculous his theory that Thomas could have had the motive to kill Vinny was! Vinny had already been arrested, and was out on bail the night he was killed!

According to B&B spoilers, Ridge continues to defend his son as fiercely as Dollar Bill Spencer (Don Diamont) is defending his, only Ridge doesn’t even pretend there is anything that needs covering up! Thomas was with Hope at the cabin the night that Vinny died, didn’t Baker remember who identified the body in the first place?

Baker contends the body wasn’t found and brought into the morgue until the next morning on The Bold and the Beautiful, and as a John Doe – there was no ID. He had no wallet or phone, and viewers of The Bold and The Beautiful will recall that is because Dollar Bill got rid of them! There’s still that little thing about his not wiping his fingerprints off the wallet and phone but they haven’t been found yet.

The Bold And The Beautiful (B&B) Spoilers: Brooke Needs A New Manhttps://t.co/zkNpqcGp90

Dollar Bill’s cover-up may still come back to bite him in the behind if they are found! Ridge still maintains that Thomas would not have killed Vinny – Thomas maintains that he will find the person who did and get justice for his friend!

The Bold and the Beautiful spoilers tease Ridge finally convinces Baker to drop his suspicions and get back to work finding the real killer and Thomas agrees! But he tells both Ridge and Thomas not to leave town, which rankles Ridge and asks Baker if he needs security to escort him off the property! Baker finally exits!