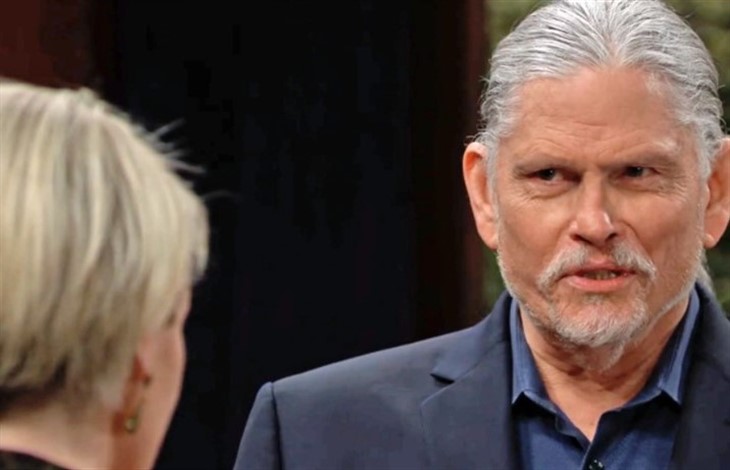 General Hospital (GH) spoilers for Monday, May 3, 2021, reveal Ava throwing a party at Wyndemere although nobody is really in a festive mood. In fact, Carly isn’t even there and is more anxious than anyone else.

Cyrus (Jeff Kober) has no idea why he’s been invited to a dinner party at Wyndemere and is even more curious why his siblings are there. Yes, Laura (Genie Francis) is in on the little plan that Ava (Maura West) and Carly (Laura Wright) cooked up to trap Cyrus and make sure he never hurts Avery, and she manages to get Martin (Michael E. Knight) there.

Carly, of course, is most certainly not at Wyndemere, but she seems to be listening in to what is going on along with Spinelli (Bradford Anderson). She does NOT like what she hears.

Over in that small Pennsylvania town known as Nixon Falls, Nina (Cynthia Watros) needs to rush to the Tan-O to catch Trina (Sydney Mikayla) before she sees ‘Mike’ and learns that Sonny (Maurice Benard) is alive. According to General Hospital spoilers, Trina is shocked to see Nina and wonders why she’d be staying in a town like this. Nina tells her she must go home right away.

Back at the clinic, Josslyn (Eden McCoy) has some questions for her father before they drive home. Namely, she wants to know how Jax (Ingo Rademacher) managed to get a bullet wound.

Over at GH, Elizabeth (Rebecca Herbst) fears for her job and needs to talk to Finn (Michael Easton). He is the one who didn’t want her at any more procedures. She barges into his office and demands to know what was in that vial he was giving Chase (Harrison Chase). Will someone tell Elizabeth who REALLY killed her husband?

Speaking of Franco’s (Roger Howarth) murder, the man accused of killing him is looking for an escape.  General Hospital spoilers show Jason (Steve Burton) is still in the hospital and is told that he has to go. The guards are ready to take him back to Pentonville. Will Britt (Kelly Thiebaud) manages to get him out of the hospital and on the run?