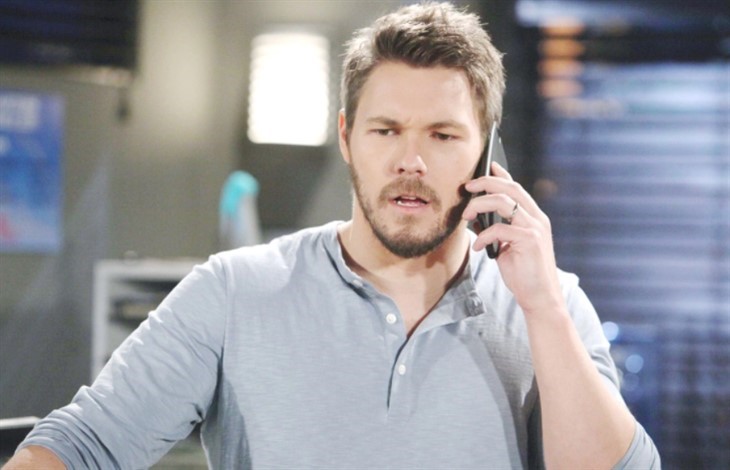 The Bold and The Beautiful (B&B) spoilers tease that in Los Angeles Liam Spencer (Scott Clifton) will be unnerved as Deputy Chief Bradley Baker (Dan Martin) zeroes in on a prime suspect in the hit and run death of Vinny Walker (Joe LoCicero) in an upcoming episode of The Bold And The Beautiful!

Liam is unnerved as Deputy Chief Baker has been asking questions at Forrester Creations, and he is zeroing in on a prime suspect! Liam may be at Forrester looking for Hope Logan Spencer (Annika Noelle) as he has been trying to make up with her and they had been making some progress up until the night Vinny was killed. Viewers of The Bold and The Beautiful will recall that Liam has been feeling very guilty about running over Vinny and his role in his death, even though it was an accident.

Liam is very worried that his father, Bill Spencer (Don Diamont) only made things worse by trying to cover everything up! Liam missed his lunch date with Hope because Dollar Bill practically held him hostage in his house, and kept beating into his head that he needed to forget what happened that night because Dollar Bill successfully covered it up – or so he thinks! But Dollar Bill failed to do one very important thing – a thing that might just lead law enforcement back to him!

When he got rid of Vinny’s cell phone and his wallet, he just threw it off a bridge into the city far below and not even into a river, lake or into the ocean. Dollar Bill was so self-confident that no one would ever tie the hit and run back to him or Liam that he didn’t wipe his fingerprints off of the cell phone and wallet before he pitched them over the railing of the bridge! Did he not think there could be someone who might find them and turn them into the authorities?

B&B Spoilers – So Many Things Go Through Liam Spencer’s Mind, And All Of Them Bad!

Viewers of The Bold and The Beautiful can just imagine all the things that are going through Liam’s mind, and all of them bad! What if Deputy Chief Baker suspects an innocent person? Why is he at Forrester Creations asking questions, and appearing to zero in on a person or persons of interest? Who is the person or persons at Forrester Creations he is apparently zeroing in on? Is he asking Hope or Thomas Forrester (Matthew Atkinson) questions about him, Liam, or is he perhaps suspecting Thomas? Did Dollar Bill try to frame Thomas for the hit and run? After all, he knows this much about crime and investigations – a suspect in a crime has to have motive, means and opportunity!

Thomas would have motive – but what if Deputy Chief Baker thinks Hope has opportunity, or some other innocent person who works at Forrester Creations? Liam would feel awful and the secret his father has forced him to keep is eating away at him inside! Dr. John “Finn” Finnegan (Tanner Novlan) could have had motive as well, but Liam knows he is not guilty and he doesn’t want to ruin Steffy Forrester’s (Jacqueline Macinnes Wood) life!

The Bold And The Beautiful (B&B) Spoilers: Zoe Unable To Change – Paris Suffers As A Result #bb #boldandbeautifulhttps://t.co/iyea1TRMxt

By this time Finn is likely not even around to be questioned, he probably has joined Steffy in Europe. He was just able to identify Vinny in the morgue because he could not get off work in time to fly out with her and Kelly Spencer (Avalon and Colette Gray). They were going to spend time in Paris, France, likely until Steffy and Finn’s baby is born. Viewers of The Bold and The Beautiful know Liam and that he may not be able to keep his secret if he knows someone who is innocent is being arrested! Little does he know that it is Hope who gets the investigation ball rolling as she tells Thomas she thinks someone killed Vinny on purpose!