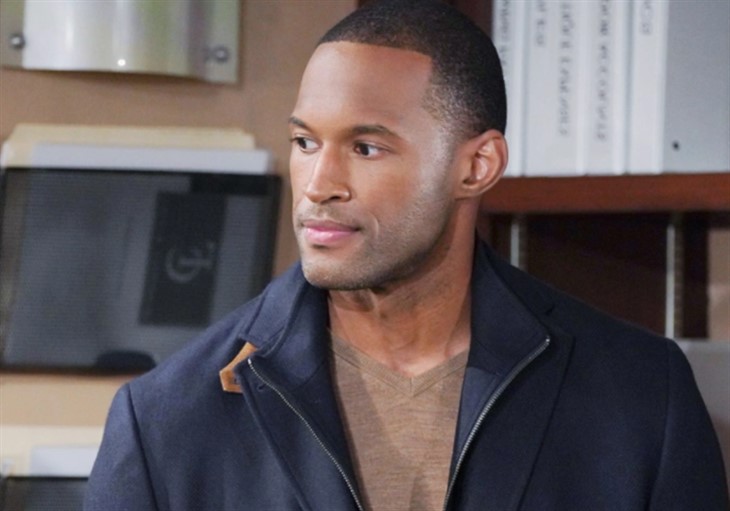 The Bold and the Beautiful spoilers reveal that fans will see a different side of Carter Walton. Actor Lawrence Saint-Victor talked about the “Quarter” storyline, which involves Carter and Quinn Forrester (Rena Sofer). Keep reading to find out what the actor had to say and what kind of changes we will see in the recently promoted COO of Forrester Creations.

The Bold And The Beautiful  – Carter Walton’s Moral Compass

B&B spoilers reveal that Carter is a fan-favorite character. However, he isn’t seen often enough. His biggest storyline this year was his relationship with Zoe Buckingham (Kiara Barnes). Even though he fell fast and hard for the model, she was torn between Carter and Zende Forrester (Delon de Metz). Instead of being honest about her internal conflict, Zoe was engaged to Carter while shamelessly seducing his oldest friend.

One thing about Carter is he is a really good man. He has an impeccable moral compass, so the fact that Zoe betrayed him was frustrating.

It seems that Carter is the one man on the soap that actually deserves the love of a good woman. However, he just ends up getting betrayed and hurt over and over again. This is infuriating to viewers, who really want to see Carter with someone who actually deserves him. Most fans agree that Zoe is not worthy of a man like Carter and he deserves so much better.

The Bold And The Beautiful  – Affair With Quinn Forrester

The Bold and the Beautiful spoilers reveal that Carter and Quinn are having an affair. They keep promising each other that it will never happen again. However, whenever they are alone together, they can’t seem to keep their clothes on. On Friday, they made a pact that they will take their secret to the grave. Quinn was overjoyed that Eric Forrester (John McCook) decided to try and work on their marriage. Afterward, Carter covered with Zoe by claiming he wanted to give her another chance. However, it seems like that is just his way of stopping Zoe with all the questions about him and Shauna Fulton (Denise Richards).

Speaking to Soap Opera Digest, Saint-Victor hinted that there is another side to Carter. During this storyline, we will see that side emerge.

“[Carter] is a stand-up guy, but that is not effortless. His efforts require work and discipline, and if you catch him in a moment where he is out of sorts or vulnerable, you will see another part of his personality. He was so rocked by Zoe that it’s hard for him to walk this straight line with someone like Quinn, with who he shares this bond and connection with.”